Went to a midnightscreening of South Korea’s long-awaited disaster movie extravaganza Haeundae. It’s weird that the film is not part of PiFan as a disaster movie and one as good-looking this would be a great opening film or closing (too big to be anything else!). Sometimes the lack of co-operation between festivals and local distributors in South Korea astounds me. I know that there was a 15 minute presentation of the film in Cannes with English subtitiles. I can’t imagine that there isn’t a print in existence without english subs, so there must be another reason. The film opened 2 nights ago and even in Bucheon it is playing at two theatre complexes every hour on the hour all day. No doubt inspired by the 2003 tsunami that swept Haeundae in September 2003 which besides ripping up the foreshore (If you look carefully at the boardwalk when attending the Pusan Film Festival you can still see evidence of the damage done) also killed 80 people. Somewhat surprisingly the film is not exactly reverential about this tenuous link and being set in the present day lots of liberties are taken with the effect of a tidal wave.

The film follows standard disaster movie procedure in some ways, but is quite original in others. An opening sequence about a man left to die by his fisherman buddies recalls the guilty burden portrayed in Twister and multiple dramatic strands mirror films from Towering Inferno to the recent far inferior Chinese film Super Typhoon (oh and watch out for the Kim Dong-ho figure who plays a property developer). The difference comes in that most of the set-up scenes actually avoid melodrama and are marbled with some very funny sequences of every day Korean life. Even when the disasterous wave strikes, the film refuses to let go of its amused sensibility. A sequence occuring after the first wave hits the Gwangali bridge is both darkly hilarious and exciting with a up-ended container ship leaning against the bridge dropping it’s cargo and the bridge cables snapping to create a deadly obstacle course for one comedy relief character. Unlikely to be a contender for any APSA category (unless a special effects category is introduced), the film nevertheless has some impressive sequences and is a good quality representative of the genre. 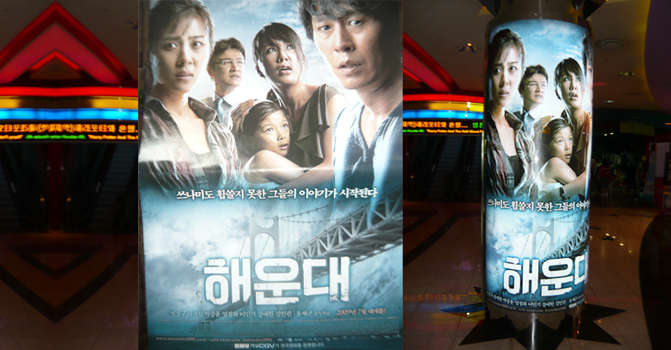