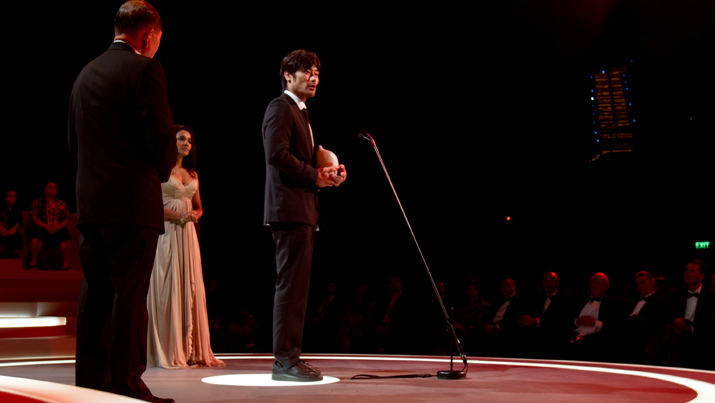 First of all, we thank you for all of your support following the big disaster in Japan on 3.11.

We received an APSA vessel in 2007 when 5 Centimeters Per Second won the Best Animated Feature Film award, and I had it on display atop the phone counter at the CWF studio’s entrance.

Then the 3.11 earthquake struck.

Tokyo was spared the huge tsunami, but the earthquake itself was still tremendous. I remember spending the night together with all of the staff at an evacuation center.

I’d been out of the office during the earthquake and the first thing I saw when I came back was bits and pieces of the APSA vessel all over the floor. It’s a sight I’ll probably never forget.

I’m usually not too concerned about winning prizes, but this year I really wanted the new trophy. I had to replace that empty spot on the phone counter.

In the end, we couldn’t win the prize this year.

However, to my incredible surprise and disbelief, at the end of the awards ceremony APSA

actually gave us a vessel to replace the one that broke in the earthquake.

I cannot describe how much this meant to me. It made me happy beyond anybody’s imagination.

A new vessel now stands safely on the spot that had been left vacant since the earthquake.

Thank you to all of the people at APSA, and thank you to our film-making friends throughout the region.