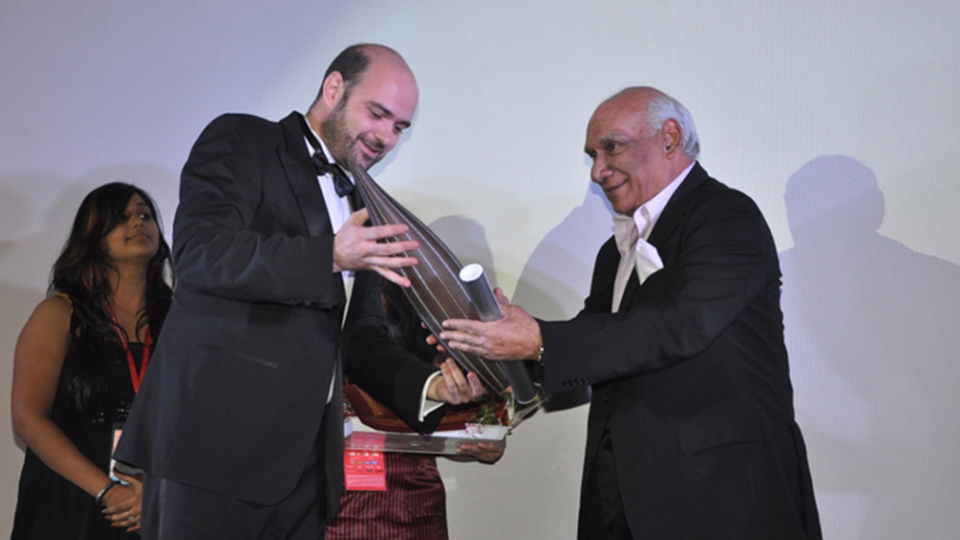 Legendary Indian producer Yash Chopra was honoured in Mumbai last night by the Asia Pacific Screen Awards (APSA) and FIAPF-International Federation of Film Producer’s Associations, who presented Mr Chopra with the APSA 2008 FIAPF Award for Outstanding Achievement in Film. The award was announced at last year’s APSA Ceremony which Mr Chopra was unable to attend due to a loss in his family, and was presented to him last night in person by FIAPF Director General, Benoît Ginisty at the opening night celebrations of the Mumbai Film Festival.

Upon receiving the award, Mr Chopra said: “I am very happy that Mr Benoît Ginisty has specially come to present this prestigious award to me which unfortunately I could not collect last year owing to a personal bereavement. I thank the Asia Pacific Screen Awards and FIAPF and humbly accept this award as a recognition for the Indian Film industry as a whole and for myself personally.”

APSA Chairman Des Power said: “We were delighted when the opportunity came for APSA to formally present Yash Chopra with his award in Mumbai.  I congratulate him for serving his industry with dignity and drive. He deserves our appreciation and well wishes for the future. I also thank our friends at the Mumbai Film Festival for allowing us this opportunity and wish them all the best for a successful festival ahead.”

Benoît Ginisty, Director General of FIAPF, in Mumbai to present the award said: “FIAPF has been involved with the Asia Pacific Screen Awards from the moment of its conception. It saw in APSA the opportunity for unique engagement with the film community of Asia Pacific and a chance to create an award exclusive to the filmmakers and producers of this region. Tonight we honour a legend of the Indian film industry, Mr Yash Chopra, for an outstanding career dedicated to cinematic excellence.”

The 2009 FIAPF Award recipient will be announced in the coming weeks ahead of the third annual APSA Ceremony on Australia’s Gold Coast on November 26.

APSA is an international cultural initiative of the Queensland Government, Australia and is a unique collaboration between CNN International, UNESCO and FIAPF-International Federation of Film Producers Associations. APSA honours the works of filmmakers across a region covering 70 countries, one third of the Earth and half the world’s film output.

With 26 organisations, across 23 countries and five continents, FIAPF is the international organisation representing film producers across the world. FIAPF is an advocate for producers and helps formulate policies and coordinate political action in many key areas of the industry. The FIAPF Award for Outstanding Achievement in Film celebrates a film producer from the region whose career and actions strongly contribute to the development of the film industry.

Thirty-seven films from 16 countries and areas will vie for the 2009 APSAs. Films are judged by the International Jury on cinematic excellence and the way in which they attest to their cultural origins.

See the live webcast of the ceremony online via the APSA website and, for ceremony highlights, tune in to CNN’s monthly movie program The Screening Room Xtra from December 3.