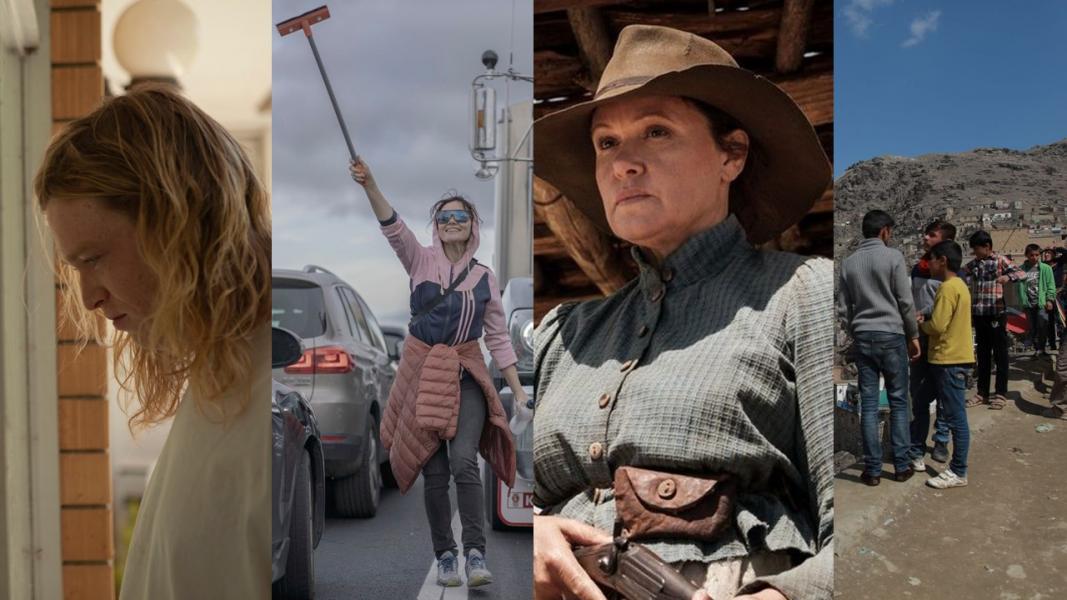 Nitram, Justice of Bunny King, The Drover's Wife the Legend of Molly Johnson, When Pomegranates Howl

Winners will be determined by the APSA International Jury, who will be announced in the coming weeks and announced on Thursday 11 November at the 14th APSA Ceremony on Australia’s spectacular Gold Coast, and streamed across the globe.

Two Australians are nominated for Best Performance by an Actress. Leah Purcell is nominated for her powerhouse performance in The Drover’s Wife The Legend of Molly Johnson which Purcell also wrote and directed. Essie Davis is nominated for her triumphant role in Gaysorn Thavat’s acclaimed social drama, The Justice of Bunny King (NZ). Both films are screening in the upcoming Brisbane International Film Festival, and Sydney Film Festival, ahead of their cinema release.

They are up against three remarkable actresses from the region. Alena YIV for her role in Asia, winner of Best Picture at Israel’s Academy Awards (Ophir Awards), Azmeri HAQUE BADHON for Rehana (Rehana Maryam Noor), the first Bangladeshi film to compete In Competition at Cannes, and from the remote Yakutia region of Russia Valentina ROMANOVA-CHYSKYYRAY for Scarecrow (Pugalo).

Nominated for Best Performance by an Actor, Nitram star Caleb Landry Jones was awarded the Cannes Best Actor for this role, and he vies with Iran’s Amir Jadidi for Asghar Farhadi’s Cannes Grand Prix winner A Hero (Ghahreman), and two actors from Georgia – Levan TEDIASHVILI for who recently won Best Actor at Tribeca for Brighton 4th and Merab NINIDZE for his role in Alexsy German Jnr’s Cannes’ Un Certain Regard selected House Arrest (Delo). Completing the Actor category is Japan’s Hidetoshi NISHIJIMA for Cannes-winner Drive My Car, who also stars in another film, nominated for Best Youth Feature Film, Voices in the Wind (Kaze no Denwa).

Iranian-Australian Granaz Moussavi’s stunning When Pomegranates Howl (Afghanistan, Australia, Islamic Republic of Iran, Netherlands) is also nominated for Best Youth Feature Film. Shot on the streets of Kabul in Afghanistan, the film follows a nine-year old boy who dreams of stardom, with the significance of this work is brought into sharp focus following the recent events in that country.

Moussavi is one of three women directors whose films are nominated in this category, along with Yoon Dan-bi for Moving On (Nam-mae-wui Yeo-reum-bam, Republic of Korea) and Saudi filmmaker Shahad Ameen’s Scales (Sayidat Al Bahr, Iraq, United Arab Emirates, Saudi Arabia). The fifth film in this category is Ferit Karahan’s Turkish drama Brother’s Keeper (Okul Tıraşı).

The APSA Ceremony on November 11 will also launch the 3rd Asia Pacific Screen Forum, an action-packed six-day program of industry-led networking opportunities, designed to facilitate relationships and collaborations between filmmakers across Asia Pacific. Like the ceremony, the forum will take place both in-person and virtually, with many nominees and APSA Academy Members participating from around the globe.

“The APSAs set a high bar for celebration of cultural diversity and cinematic excellence which is why, as an Australian-based organisation, it is so exciting to see so many Australians, and Australian productions, among the nominees.

The Asia Pacific Screen Academy is incredibly proud to present the 14th Awards Ceremony in 2021 with the full complement of Award categories, our special awards in collaboration with founding partners UNESCO and FIAPF, and the Academy-specific initiatives with the MPA and APSL.

APSA continues to identify, support and amplify the careers of emerging storytellers throughout Asia Pacific, with 18 of the 38 nominated films by first or second feature directors, and the annual presentation of the Young Cinema Award in partnership with NETPAC and GFS.

And perhaps most importantly, APSA continues to honour and respect the many cultures of this richly diverse region as represented through cinematic excellence.

In 2021, the APSA International Nominations Council considered films in APSA competition from 43 Asia Pacific countries and areas, and we are thrilled to see the first nomination for a film from Vietnam with cinematographer Nguyễn Vinh Phúc nominated for his work in LÊ Bảo’s Taste (Vị).

My sincere thanks to the 2021 APSA International Nominations Council, headed once again by the eminent Professor Hong-Joon Kim for your outstanding work with this most difficult task.

“As Mayor, I’ve replaced the red carpet with a gold carpet as we roll out the welcome mat for these awards and the amazing talent that supports the industry.’’

“The Asia Pacific Screen Forum underscores our city’s commitment to this global industry.”

“Each year, the Asia Pacific Screen Awards shines a light on inspirational talent from the region, including Queensland’s diverse and creative local content creators. As host for the Awards and the Forum, our state is positioned as an important screen hub for the wider Asia Pacific region. Screen Queensland is proud of our ongoing support of the event, which  allows Queensland practitioners to connect and collaborate with industry counterparts from across the Asia Pacific.”

“I’m very excited and honoured to be nominated for the APSA Youth Feature Film Award, and am hoping that my film will find a wider audiences who will relate to the plight of children stuck in adult wars.”

Films from Japan and Islamic Republic of Iran lead the field with seven nominations each. Two films, both winners at Cannes this year, Ryusuke Hamaguchi’s Drive My Car and Asghar Farhadi’s A Hero (Ghahreman), achieved the most nominations, with both films up for the same four categories – Best Feature Film, Achievement in Directing, Best Screenplay and Best Performance by an Actor.

Another Cannes winner, Payal Kapadia’s breakthrough A Night of Knowing Nothing (India) is also nominated for Best Feature Film, as is Russian director Natalya Nazarova’s The Pencil (Prostoy karandash) and Iranian Mohammad Rasoulof’s Golden Bear winner There is No Evil (Sheytan vojud nadarad).

Given the impact of COVID on the region, the eligibility of films in competition this year was extended back to the end of 2019, increasing the field and calibre of competition significantly.

Nominations for Achievement in Directing, Best Screenplay, Achievement in Cinematography and Best Performance categories for Actress and Actor follow in the list below. The winners will be determined by the APSA International Jury, who will be announced in the coming weeks.

Winners will also be announced in APSA’s three special categories, the Cultural Diversity Award under the patronage of UNESCO, the Young Cinema Award in partnership with NETPAC and GFS, and the FIAPF Award for Contribution to Asia Pacific Cinema.

The APSA Ceremony will include the annual announcement of recipients of the four MPA APSA Academy Film Fund grants for 2021.

A Night of Knowing Nothing

Voices in the Wind (Kaze no Denwa)

The Knight and The Princess

The Nose or The Conspiracy of Mavericks (Nos ili zagovor netakikh)

Where is Anne Frank

Ryusuke HAMAGUCHI for Drive My Car

Akiko ASHIZAWA for Vengeance Is Mine, All Others Pay Cash (Seperti Dendam, Rindu Harus Dibayar Tuntas)

Essie DAVIS for The Justice of Bunny King

Amir JADIDI for A Hero (Ghahreman)

Hidetoshi NISHIJIMA for Drive My Car

Further Awards to be announced

The Young Cinema Award in partnership with NETPAC (Network for the Promotion of Asian Cinema) and Griffith Film School (GFS) recognises the abundant emerging talent of the Asia Pacific.

Determined by FIAPF–International Federation of Film Producers Associations for outstanding achievement in film in the Asia Pacific region.

All APSA nominees, Nominations Councils Jury members are inducted into the prestigious APSA Academy presided over by Australian screen legend Jack Thompson AM PhD. The Academy boasts over 1,300 of the region’s leading filmmakers and provides exclusive networking, development and funding opportunities available to Academy members through the MPA APSA Academy Film Fund, and Academy mentoring opportunities for the next generation of Asia Pacific filmmakers through the Asia Pacific Screen Lab.

ABOUT THE ASIA PACIFIC SCREEN FORUM

Launched in 2019, the Asia Pacific Screen Forum presents an action-packed program of industry-led networking opportunities, designed to facilitate relationships and collaborations between filmmakers across Asia Pacific. Providing fertile creative ground for APSA nominees and guests to strengthen their connections, the program is open to all industry professionals, providing an unprecedented opportunity to meet and learn from filmmakers from right across the region.

In 2021 the Forum will inspire new connections and models of filmmaking under the theme The Influence of Production on Story. This topic will be explored through a series panel discussion and interactive case studies. The forum will also feature in-conversations, screenings, roundtable discussions and one-on-one meetings and mentorships across Asia Pacific.