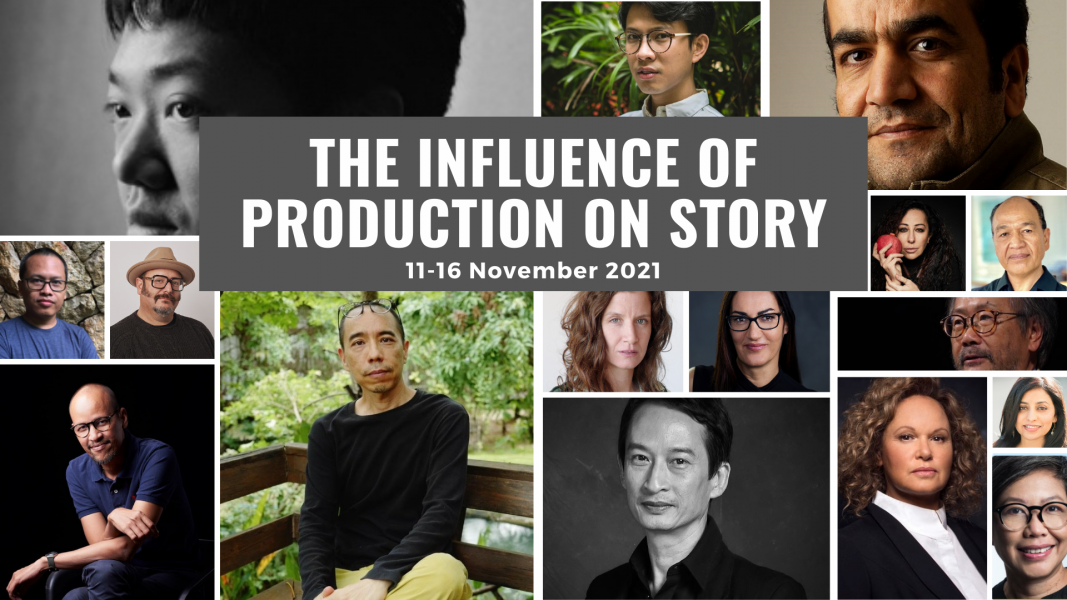 Presented as both a physical and globally streamed event, the Forum’s theme The Influence Of Production On Story is explored via a series of panels, in conversations and case studies. Open to the screen industry and featuring APSA Jury, nominees and Academy Members, the 6-day event is designed to spark lively screen culture discussions with themes of inclusion, accessibility, authenticity, excellence in craft, and connection.

With Jack Thompson AM PhD as President of the Academy, the event is presented by the Asia Pacific Screen Awards’ prestigious Academy of filmmakers, one of the largest and most diverse film Academies in the world.

Bringing together the most extraordinary talent, the 2021 Asia Pacific Screen Forum has grown in its 3rd year. Officially opening on Thursday November 11 with the gala Asia Pacific Screen Awards to be held at HOTA on the Gold Coast, Australia, the Forum sessions will commence on Friday November 12 with a program of three significant panel discussions featuring some of the most influential leaders in their field, and encompassing some of the biggest issues faced by the storytellers of Asia Pacific and beyond.

First and second-time directors represent almost half of the APSA nominated films for 2021 and Reel Connections featuring keynote speaker Yeo Siew Hua, (winner of the 2018 APSA Young Cinema Award for his Locarno winning film A Land Imagined) is an offering for like-minded emerging filmmakers to share ideas, stories and experiences.

Exploring informal and formal co-production strategies, the Creativity and Financing panel discussion is steered by some of the best producers in the region including Nick Batzias, with a background in acquisitions, business affairs and production and producer of Nitram (Nominated for Best Performance by an Actor APSA 2021), and Meiske Taurisia the producer of Vengeance Is Mine, All Others Pay Cash (Nominated for Achievement in Cinematography APSA 2021).

Exploring themes of representation, accessibility and authenticity, the Maintaining Authenticity In Production panel representatives hail from a diverse and esteemed background. Writer/director of Fiji’s first feature film The Land Has Eyes, and specialist in indigenous storytelling, art and cultural identity, Vilsoni Hereniko will be joined by Ana Tiwary of indiVisual films who specialises in multicultural stories for global audiences as well as acclaimed filmmaker Tran Anh Hung.  This panel will explore how to navigate the demands of production to deliver authentic stories in cultural and diaspora film.

Join Man Booker International Prize Nominee Eka Kurniawan (Vengeance is Mine, All Others Pay Cash) who discusses the process of development for writing, direction and producing From Page To Screen: Adaptations for Film. Eka is joined by the multi-talented Leah Purcell (Writer/Director and APSA 2021 Best Actress nominee for The Drover’s Wife The Legend of Molly Johnson) and one of New Zealand’s most celebrated writers Briar Grace-Smith (Director – Cousins).

These events add to the previously announced powerhouse lineup of events featuring Palme d’Or and APSA Best Film winner Apichatpong Weerasethakul, together with APSA FIAPF Award winning producer at the forefront of the Thai independent cinema movement, Soros Sukhum, a Conversation with Jeremy Chua (Singapore) and Bina Paul (India), plus a stacked global line-up for the popular Meet the Programmers session. Additionally, global personalised networking is made available via Random Connections which is a virtual replication of the all-important networking and connections achieved by attending festivals, awards and screen events where chance meetings can result in creative collaboration, knowledge transfer and support.

The week-long series of events will be accessible online to participants right across the vast region as well as in person at Home of the Arts (HOTA) on the Gold Coast. The events will take place November 11-16 in the lead up to the previously announced Award Presentation on the evening of Thursday, November 11.

“The Asia Pacific Screen Forum has grown from strength to strength, embracing the need to increase support for the filmmakers of Asia Pacific with more opportunities to connect, network, learn and develop. We have crafted an event rich in talent and diversity, with over 30 expert industry speakers from 17 countries and areas of Asia Pacific and beyond.

The opportunity for screenmakers to hear from some of the world’s top decision-makers for festivals, sales agents, broadcasters and distributors provides unprecedented access to these gate-keepers to reach an audience, and provides an insight into how these decisions are made.

APSA continues to identify, support and amplify the careers of emerging storytellers throughout Asia Pacific, with 18 of the 38 nominated films by first or second feature directors, and the annual presentation of the Young Cinema Award in partnership with NETPAC and GFS. The Forum presents specially crafted events to speak directly to these emerging voices.

“Each year, the Asia Pacific Screen Awards shines a light on inspirational talent from the region, including Queensland’s diverse and creative local content creators. As host for the Awards and the Forum, our state is positioned as an important screen hub for the wider Asia Pacific region. Screen Queensland is proud of our ongoing support of the event, which  allows Queensland practitioners to connect and collaborate with industry counterparts from across the Asia Pacific.”

The Forum is presented by the Asia Pacific Screen Academy, with the support of the City Of Gold Coast, Screen Queensland, Netflix, Motion Picture Association, Griffith University Griffith Film School.

All times are AEST.  All panels are virtual (V) Some are also physical (P)

All screenings are physical only, at HOTA, Home of the Arts

Registration is now open at https://www.asiapacificscreenawards.com/asia-pacific-screen-forum

18:00 PANEL: In Conversation with Apichatpong Weerasethakul and Soros Sukhum (V+P)

Nominations for the 14th Asia Pacific Screen Awards were also announced today and the full list can be found here: https://www.asiapacificscreenawards.com/

All APSA nominees, Nominations Councils Jury members are inducted into the prestigious APSA Academy presided over by Australian screen legend Jack Thompson AM PhD. The Academy boasts over 1300 of the region’s leading filmmakers and provides exclusive networking, development and funding opportunities available to Academy members through the MPA APSA Academy Film Fund, and Academy mentoring opportunities for the next generation of Asia Pacific filmmakers through the Asia Pacific Screen Lab.