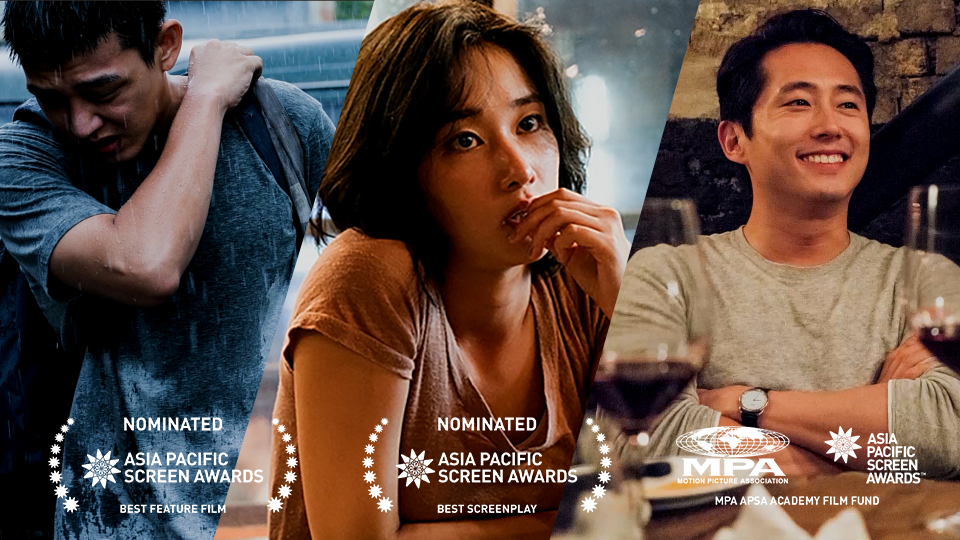 The Motion Pictures Association of America (MPA), the Embassy of Australia and the Embassy of the Republic of Korea on Monday evening jointly hosted a special screening of the internationally-acclaimed Korean film Burning in Washington DC in a celebration of the Brisbane-based Asia Pacific Screen Awards (APSA) and the success of the MPA APSA Academy Film Fund. Burning producer Lee Joon-dong travelled to the US to present the film and participate in a Q&A.

Starring American actor of Korean descent Stephen Yeun (The Walking Dead, Okja), produced by Lee Joon-dong and directed by his brother, Korean auteur Lee Chang-dong, Burning was a recipient of the MPA APSA Academy Film Fund (2010) for script development and is currently nominated for Best Feature Film and Best Screenplay at the 12th Asia Pacific Screen Awards, the region’s highest accolade in film.

At the event, Chairman & CEO of the Motion Picture Association Of America, Charlie Rivkin, presented Australia’s Michael Hawkins with the MPA Creativity Award, for excellence in the promotion of Asia Pacific filmmaking, in recognition of his work in developing the Asia Pacific Screen Awards. 2018 will Hawkins’ sixth APSA ceremony in the role, a key period of growth for the awards and its Academy.

MPA APSA Academy Film Fund is a unique initiative created to support the development of new feature film projects from the culturally diverse Asia Pacific region, which spans 70 countries and areas and is the fastest growing region in the world in terms of cinema production. Projects are assessed by the same criteria that apply to films in the APSA competition – films that best reflect their cultural origins and demonstrate cinematic excellence.

Now entering its ninth round, the fund has seen phenomenal success in 2018, with a staggering five films selected to premiere at Cannes (Ayka, Burning, The Wild Pear Tree) and Venice Film Festivals (The River, Memories of My Body), with several going on to win key awards at both events. The fund awards four development grants of US$25,000 annually and is wholly supported by the MPA. It is open to APSA Academy members and their colleagues.

Burning, based on a short story by celebrated Japanese author Haruki Murakami, broke records at Cannes to become the highest-rated film in the history of the Screen International critic’s poll and also won the FIPRESCI Prize. The film is Korea’s official submission to the 91st Academy Awards® for Best Foreign Language Film, where it is in the running to become the first Korean film ever nominated.

In a surprising and unprecedented move that literally places the Asia Pacific Screen Awards in the picture, two of Lee Chang-dong’s winning APSA awards can be seen featured in scenes of Burning. The unique glass awards, designed by Brisbane artist Joanna Bone for APSA winners, were won for Best Feature Film (Secret Sunshine, 2007) and Achievement in Directing (Poetry, 2010). Lee has won an additional third APSA for Best Youth Feature Film as a producer on The World of Us (2016) and has received a total of eight APSA nominations.

The Washington screening comes as the film goes into wide release in the United States  cinemas this week and continues to receive rave reviews, with Criterion just days ago declaring it will be ‘one of the most talked-about films of the year’.

The  ninth round of Academy Film Fund recipients will be determined by the 2018 jury comprised of Kiki Fung, Programmer at the Hong Kong International Film Festival, Korean Producer Kim Young and returning Jury Chair Andrew Pike OAM of Australia.

The recipients will be announced at the 12th Asia Pacific Screen Awards Ceremony in Brisbane, Australia on 29 November In 2018, 46 films from 22 countries and areas are nominated for the awards.

Charlie Rivkin, Chairman and CEO of the Motion Picture Association of America:

“For more than six years now, Australia’s Michael Hawkins has demonstrated great leadership in promoting quality filmmaking from across the Asia Pacific in his stewardship of the Asia Pacific Screen Awards. We are proud to partner with the APSAs in the MPA APSA Academy Film Fund which has enjoyed such great success at film festivals and awards around the world, and we are delighted to recognize his significant contribution to filmmaking with the MPA Creativity Award For excellence in the promotion of Asia Pacific filmmaking.”

“Asia Pacific filmmakers are making their mark on the global stage, both in terms of their critical success at major awards and festivals, and in terms of their commercial appeal – and the Asia Pacific Screen Awards has contributed substantially to this trend. We celebrate the outstanding artistic merit of films like Burning, which received support from the MPA APSA Academy Film Fund, and congratulate the APSAs on the important role they are playing in recognizing some of the region’s most astonishing talent.”

Michael Hawkins, Chair of the Asia Pacific Screen Awards, and its Academy:

“I would like to thank the MPA for this award, which is a great recognition of APSA and all that it stands for. This event, here at the MPAA’s headquarters in Washington DC, is a great opportunity to showcase what APSA and the MPA are achieving together and we are all very proud to welcome producer Lee Joon-dong to this special screening of Burning, an MPA APSA Academy supported film and already an internationally celebrated story from our region.”