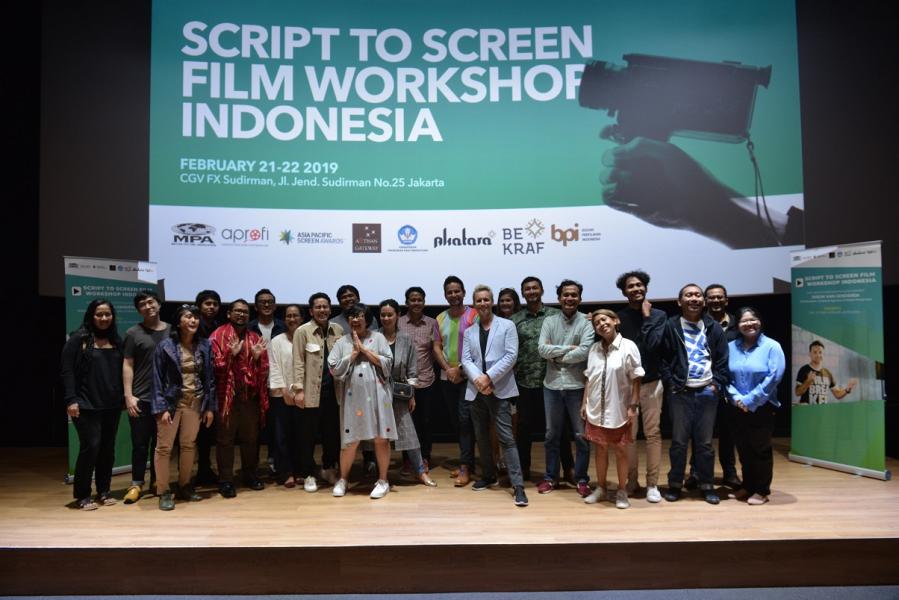 The Motion Picture Association (MPA) in conjunction with its local partners throughout the region, including the Asia Pacific Screen Awards (APSA), continue their commitment to supporting the next generation of regional creatives through generous, productive and educative conferences such as the 2019 Script to Screen series taking place in Malaysia, Indonesia, Thailand, and Vietnam.

These workshops offer an opportunity for emerging filmmakers throughout Southeast Asia to upskill and equip themselves with new tools and to learn from local and international experts about innovative approaches to screen creation and distribution.

Inviting an array of international film professionals from various disciplines and arenas, including a masterclass, this year’s Kuala Lumpur and Jakarta conferences, on February 19 and February 21-22, respectively, crackled with energy as emerging and experienced practitioners prepared for the final event: the pitch sessions.

While in part designed to share stories and hone pitching skills – a standard practice throughout the industry between mentors and creators – it is also a competition.  And the prize could be quite pivotal for any developing film maker.  This year, as in previous years, the winners receive an all-expense paid trip to Los Angeles to attend the LATC Global Film & TV Program, an annual immersion course on recent U.S. film, television, and entertainment industry topics.

Speaking to the Malaysian participants this year as they waited for the jury of prominent local and MPA-selected judges to choose the winning movie pitch, it was clear that their fellowship and unity was forged during the previous days’ workshops.  In fact, when grand prize winner Amina Jindani accepted her award for her movie in development Silap Mata, a dark comedy about the nature of celebrity, she “promised to return and share her experience with her seven other semi-finalists.”

Prominent director and APSA Academy member U-Wei Bin Haji Saari (The Arsonist, Hanyut) kept the mood light with his deceptively informative double-entendres and advice taken from The Good, The Bad and The Ugly about getting to the point before you’re dead in the water.

Breaking the mold, MPA’s VP of Communications Stephen Jenner announced that this year the jury decided to give the “first ever, on the spot” award to documentarian finalist, Jasmine Low, for her proposed film about obesity in Malaysia. In fact, the idea was so spontaneous, the prize is yet to be named, but promises to be a rewarding interactive conference.

A highlight of both events was a magical masterclass with the highly talented and entertaining ‘Filmbreaker’ Jason Van Genderen. Many in the audience came particularly for his presentation on iPhoneography, illuminating the innovations in equipment and apps and the assets to be found in their implementation. Jason is an award-winning short film maker and highly successful commercial producer.

Equally taut and exciting, the pitch sessions in Indonesia brought double the number of entrants from the previous year and seamlessly selected an equal number of newcomers and veterans to vie in the arena together, each with the same chances for the grand prize but also offering three second-place prizes: entry to this year’s Akatara competition in September.

Ranging from slide shows to several minutes of polished movie clips, the creatives addressed the jury with their loglines, production needs and marketing ideas. This year’s grand prize, certainly a crowd favorite and based on the optioned, internationally-acclaimed bestselling novel by Indonesian author Eka Kurniawan, went to director/producer Meiske Taurisia for the film Vengeance is Mine, All Others Pay Ca$h. The runners up were Radio Rimba (Sim F), Ancestors, Sword of Kalimantan (Ezra Putra Situmorang) and Everwood (Cahya Daulay).

The next two Script to Screen workshops and awards will be held in Bangkok and Ho Chi Minh City on March 5 and 7, respectively.

For more information and to keep abreast of other MPA initiatives, visit them at https://www.facebook.com/motionpictureassociation.

This article was written by Fran Rittman and first appeared on the Centre for Content Promotion.