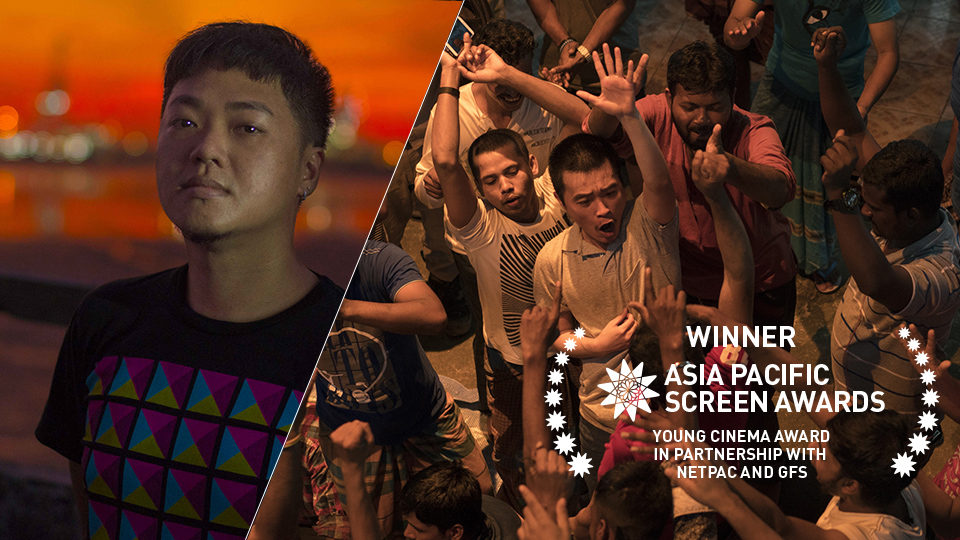 Singaporean filmmaker Yeo Siew Hua has been announced as the recipient of the 2018 APSA Young Cinema Award for his Locarno Festival Golden Leopard (Best Film) winner A Land Imagined.

The APSA Young Cinema Award is presented in partnership with NETPAC (Network for the Promotion of Asia Pacific Cinema) and Griffith Film School (GFS) to recognise the emerging filmmaking talent of Asia Pacific. Yeo Siew Hua will be presented with the award at the 12th Asia Pacific Screen Awards (APSA) in Brisbane, Australia on 29 November.

The Young Cinema Award is eligible to directors of debut or sophomore feature narrative films. In 2018, 57% of the 268 films in the APSA Competition were by a first or second time director. The Award is determined by the International Nominations Council, who said “This well-scripted, deftly directed and beautifully-lensed thriller vividly captures the dangers for and the loneliness of illegal workers against the background of Singapore’s controversial land reclamation project.”

Chair of APSA and its Academy Michael Hawkins said “It is with great pleasure that we welcome Yeo Siew Hua back to Brisbane to accept this award. Brisbane and the Asia Pacific Screen Academy played an integral role in the development of A Land Imagined through the Asia Pacific Screen Lab, based here at our world-class Griffith Film School. It is testament to both Yeo Siew Hua’s talent as a filmmaker, and the foundation of development afforded him in Brisbane that his film has won so many major international awards already.”

A Land Imagined, the first ever Singapore-French-Dutch official co-production, is also nominated for the 12th APSA Achievement in Cinematography for Japanese director of photography Hideho Urata, with the winner to be determined by the APSA International Jury.

In 2016 Yeo Siew Hua was selected for the second intake of the Asia Pacific Screen Lab, an intensive year-long mentorship initiative for early career filmmakers. The Lab is an initiative of NETPAC hosted and administered by the Griffith Film School, Griffith University Brisbane, in collaboration with the APSA Academy, supported by the Sun Foundation. Yeo Siew Hua was mentored by APSA Academy member, filmmaker, author and tireless champion of Asian cinema with a career spanning more than five decades, Peggy Chiao Hsiung-Ping.

Director Yeo Siew Hua said “”Truly an honour to receive the Young Cinema Award at the Asia Pacific Screen Awards, putting me in good company with some of the great filmmakers that I respect so highly. This is an award of potential and possibility, and I hope to fulfill it while contributing to the greater cinematic discussion we have started in this region.”

Now in its third year, the Young Cinema Award has previously been awarded to

Media accreditation is now open and interviews are available with APSA guests.

YEO Siew Hua won the prestigious Golden Leopard at the 71st Locarno Festival with the premiere of premiere his film A LAND IMAGINED (2018) in the main Concorso Internazionale. The film is a first ever Singapore-French-Dutch co-production and was awarded the Hubert Bals Fund, the Grand Prix at Autumn Meeting 2016 and the Audience Design Award of the Torino Film Lab. The film has since won a number of awards including the grand prize of the Gold Star at the 2ndEl Gouna International Film Festival for the Best Narrative Feature, the Asian Next Wave Pylon Best Picture at QCinema International Film Festival 2018, the Roberto Rosselini Jury Award of the Crouching Tiger main competition at the 2nd Pingyao International Film Festival, and Best Cinematography of the official section at the 63rd Semana Internacional de Cine de Valladolid (SEMINICI), the Special Jury Mention at the 3rd London East Asia Film Festival, the Junior Jury 1st Prize and the Ecumenical Jury Special Mention in conjunction with Locarno Festival 2018. He is a member of the Asia Pacific Screen Academy and also a founding member of the 13 Little Pictures film collective, which produced his first feature In The House of Straw (2009) and also his documentary The Obs: A Singapore Story (2015).