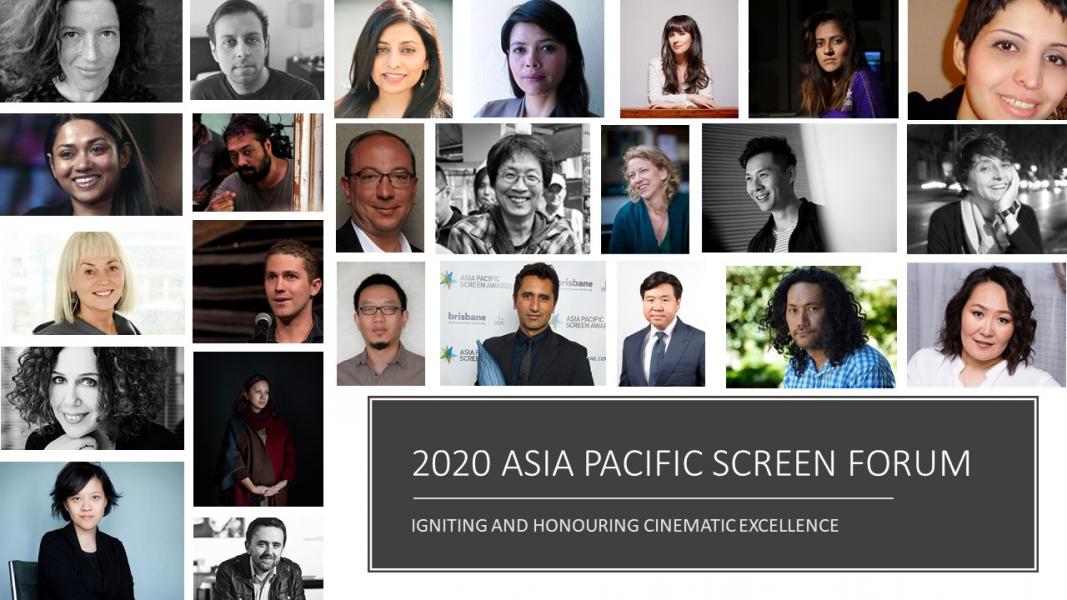 The 6-day conference will deliver a hit of optimism on what the future of the industry has in store as it regenerates after a tumultuous year globally. This will be the first screen industry conference in Australia and one of the first in the world since COVID-19 created global shutdowns.

The event is presented by the Asia Pacific Screen Awards’ prestigious Academy of filmmakers, the one of the largest film Academy in the world and the most diverse, with Jack Thompson AM PhD as President of the Academy.

The global line-up of leading filmmaking and industry talent hail from eighteen different countries and the event is set to be more accessible and inclusive than ever before as it goes digital.

From a Turkish Cannes Palme d’Or Winner, an international critical sensation from Korea and an Indian box office smash hit, participants will have the opportunity to engage with a phenomenal line-up of award-winning filmmakers whose projects have wowed audiences across the world.

Tracey Vieira, Chair of Asia Pacific Screen Awards (APSA) “We are thrilled to present this programme to the global and local screen industry and engage in meaningful conversations about cultural stories for the screens of the future.

The forum will provide new visions for diversity and inclusion, explore leadership through the female lens and look to the Asia Pacific as it continues to offer a diverse and fascinating depth of stories that are exciting audiences all over the world”.

The week-long series of events will be accessible for free online to participants right across the vast region as well as in person at Home of the Arts (HOTA) on the Gold Coast.

The programme includes a range of panel discussions, intimate roundtable discussions with an accompanying screening programme for local participants.

Open to screen industry and featuring APSA Academy Members, the week is designed to spark lively screen culture conversations with a strong focus on the themes of inclusion, excellence in craft, and women in the industry.

The events will take place 20 – 26 November in the lead up to the previously announced Award Presentation on the evening of Thursday 26 November.

The Forum is presented by the Asia Pacific Screen Academy, with the support of Screen Queensland, in partnership with Home of The Arts (HOTA), Motion Pictures Association, the Australian International Movie Convention and Women in Film and Television Queensland (WIFT).

THE RISE OF SCREEN STORIES FROM THE ASIA PACIFIC: MPA Film School Friday

With participants from countries in all corners of the region, this diverse group of filmmakers will examine the range and depth of storytelling offered by the Asia Pacific region. The discussion will focus on what exciting new experiences this can bring and is bringing to audiences on screen, and how the MPA APSA Academy Film Fund is contributing to discovering and developing these stories.

This feature discussion event will be accompanied by a screening programme of films by each of the four esteemed panellists from Turkey, Australia and Bangladesh. Screening at HOTA.

MADE IN BANGLADESH – by WIFT International Board member and feminist filmmaker Rubaiyat Hossain (Bangladesh).
11am Sunday 22 November

Presented by WIFT Australia (Queensland) in partnership with APSA and Australian Guild of Screen Composers (AGSC).

Sneha Khanwalkar is a vibrant and renowned music director and composer who works in Hindi films. She is best known for her score for the film, Oye Lucky! Lucky Oye!, and also for her hit soundtrack for the smash hit Gangs of Wasseypur Part 1, Part 2. A walk inside this musical mind is not to be missed!

A Change Maker discussion, tabling case studies of organisations that apply community-based models to inclusion as we work towards celebrating a more diverse future in the screen industry and beyond.

Talent: Genevieve Clay-Smith, Co-Founder of Bus Stop Films (Australia) Bus Stop Films is a pioneering, not-for-profit organisation that uses filmmaking and the film industry to raise the profile of people living with disabilities and other marginalised groups, on both sides of the camera.

Tim Soutphommasane (Australia) is a political theorist and professor at the University of Sydney. He was Australia’s Race Discrimination Commissioner at the Australian Human Rights Commission from 2013 to 2018.

Craig Gainsborough (New Zealand) producer of Rūrangi. More then a series, Rūrangi is a movement to create social change for New Zealand’s gender diverse community by empowering screen creatives to tell their own stories and represent themselves autonomously.

Ana Tiwary (Australia), founded the Diversity in Australia Media community over a decade ago. She is a producer/director and her company indiVisual films specialises in diverse stories. Recently Ana produced Rhapsody of Love, the first Asian Australian Rom-com.

Presented in partnership with Screen Queensland.

Building on the remarkably successful editions in previous years, the roundtable discussions in 2020 are comprised of four intimate sessions, providing a unique space for screen creatives to openly discuss their craft. While topics are familiar, the chance to openly discuss industries from different cultural, political, linguistic and budgetary frameworks provides an unparalleled opportunity for the participants to learn from each other.

These sessions are FREE, and open by expression of interest to a limited total number of participants to ensure an intimate conversation where everyone can contribute.

Presented in partnership with the Screen Producers Australia.

DISTRIBUTION: A local and international perspective.

Presented in partnership with the Australian International Movie Convention.

An international conversation about the challenges and the joys of making local films for a global audience.

Writer / Directors – The Future of Storytelling

Our diverse panel delve into the future of screen stories, where inclusion and diverse representation will reinvigorate and enrich the storytelling of the future in its many forms.

All APSA nominees, Nominations Councils Jury members are inducted into the prestigious APSA Academy presided over by Australian screen legend Jack Thompson AM PhD. The Academy boasts over 1,200 of the region’s leading filmmakers and provides exclusive networking, development and funding opportunities available to Academy members through the MPA APSA Academy Film Fund, and Academy mentoring opportunities for the next generation of Asia Pacific filmmakers through the Asia Pacific Screen Lab.

ABOUT WOMEN IN FILM AND TELEVISION (WIFT) AUSTRALIA

WIFT Australia is a national organisation working towards gender equality, equity and parity for all women and non binary people in the screen industry. WIFT Australia was formed because we believe communities are stronger together and that national problems need national solutions.

Our current flagship initiatives are: