Symposium on Creative Producing Presented by APSA and CILECT 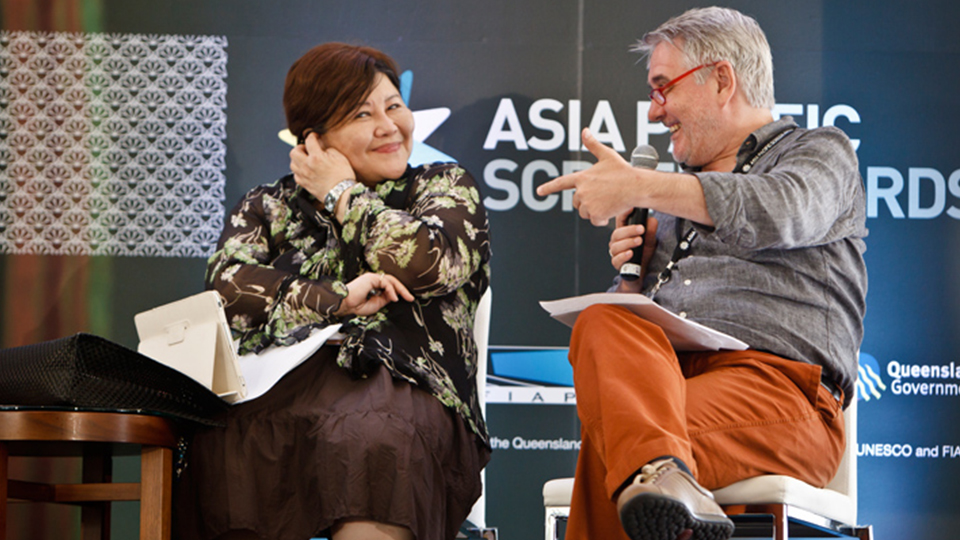 The Asia Pacific Screen Awards (APSA) will partner with Asia Pacific’s regional arm of CILECT, the association of the world’s major film and television schools, to present a symposium on creative producing curricula ahead of the fourth annual APSA Ceremony on December 2.

Leading professionals and educators across Asia Pacific will meet in Brisbane and on the Gold Coast for the CILECT Asia Pacific Association (CAPA) Creative Producing Symposium, culminating in attendance at the APSA Ceremony – the region’s highest accolade in film.

The first two sessions of the Symposium will take place on Wednesday December 1 as part of the official sidebar activities in the lead up to the APSA Ceremony and will be attended by APSA Nominees, industry representatives and VIP guests.

The Challenges for the Future of Asia Pacific Producers panel will address the topic of what challenges the future generation of Asia Pacific Screen Producers will face: investing and fund raising issues; strategic partnerships for a multi-platform business; and future developments in the field of cross-national and cross-regional screen production.

CILECT delegates attending from the region will continue the symposium activities in Brisbane on Thursday December 2 and travel back to the Gold Coast to attend the fourth annual Asia Pacific Screen Awards.

CILECT (Centre International de Liaison des Ecoles de Cinéma et de Télévision) is the association of the world’s major film and television schools. Its goals are to provide a means for the exchange of ideas among member schools, and to help them understand the future of education for creative personnel in film, television, and related media. It is dedicated to the creation, development and maintenance of regional and international co-operation among its member schools, and to the encouragement of film and television training in the developing world.

CILECT was founded in Cannes in 1955 with the intention of stimulating a dialogue among film schools in the deeply divided world of those times. Its membership was drawn from eight countries: Britain, Czechoslovakia, France, Italy, Poland, Spain, the Soviet Union and the United States. By the year 2010, CILECT had grown to include 148 institutions from 58 countries on five continents. A significant number of the world’s leading film and television makers are graduates of member schools. CAPA is the CILECT Asia Pacific Association. There are three Australian member schools which are: Griffith Film School, Griffith University; Victorian College of the Arts School of Film & Television; and the Australian Film Television and Radio School (AFTRS).

APSA acclaims, at a global level, the cinematic excellence and cultural diversity of the vast Asia Pacific region. Established in 2007, APSA is an international cultural initiative of the Queensland Government, Australia, through Events Queensland. It brings together, in unique collaboration Paris-based UNESCO and FIAPF-International Federation of Film Producers Associations. The initiative honours the works of filmmakers from an area representing four billion people; 60 percent of the global population; 70 countries and areas; one third of the earth; and half the world’s film output. 239 films competed this year  with 31 films from 15 countries and areas nominated in nine award categories. The APSA Ceremony will be webcast live at www.asiapacificscreenawards.com

What is expected from the future generation of Asia Pacific Screen Producers? What are the specifics of the region? We will also look at the differences between mainland Chinese schools and Hong Kong and draw comparisons. We will discuss the business of investing and fund raising, strategic partnerships for the multi-platform business of creative screen producing will be discussed. Finally, how to enhance the engagement with the other parts of the world: how can our schools play a proactive role in this ever changing and very flexible environment?

In his speech Lord Puttnam will examine the opportunities and challenges for cinema in the early 21st century. In particular he will consider the need for filmmakers to engage with significant issues of the day, and the need to address the huge changes brought about by the transition to a fully digital era in film. This will involve drawing on all the creative and imaginative possibilities presented by the online world. The keynote address will be followed by a 20 minute Q&A session with Lord David Puttnam hosted by Radio National’s Julie Rigg.