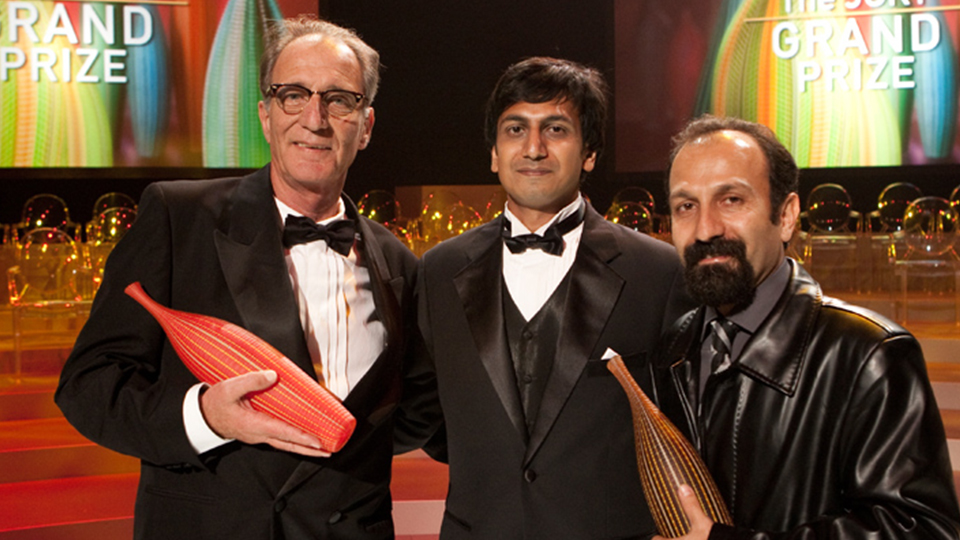 2009 Asia Pacific Screen Awards (APSA) Jury Grand Prize winners About Elly and The Time that Remains will screen this weekend at Brisbane’s Gallery of Modern Art (GoMA) as part of the APT6 Cinema program at the Australian Cinémathèque. The Promised Lands cinema program will screen over the coming months as part of The 6th Asia Pacific Triennial of Contemporary Art.

In addition to the film screenings, a series of photographs by 2009 Nominee for Best Documentary Feature Film, Thailand’s Manit Sriwanichpoom is featured in the APT6 exhibition.

Winners in the third annual APSAs were presented two weeks ago on Australia’s Gold Coast. The International Jury awarded two Jury Grand Prizes to the director of About Elly, Asghar Farhadi (Islamic Republic of Iran), and the director of The Time That Remains, Elia Suleiman (Palestinian Territories). The Time That Remains is the first film from the Palestinian Territories to be nominated in the APSAs.

About Elly, received the most nominations of any film this year and also received the Award for Best Screenplay along with the Jury Grand Prize. Asghar Farhadi, the writer, director and producer of the film was at the Ceremony on Australia’s Gold Coast to personally accept the awards. On accepting the award Asghar Farhadi said: “I have never felt so proud to be Iranian.”

Two major projects are presented at the Australian Cinémathèque for APT6: Promised Lands and The Cypress and the Crow: 50 Years of Iranian Animation. Three filmmakers are also included among the APT6 artists, and will be profiled with retrospective seasons during the exhibition: Takeshi Kitano (Japan), Ang Lee (Taiwan/USA), Rithy Panh (Cambodia/France).

Best Performance by an Actress

With the return of their friend Ahmad from Germany, a group of old college friends decide to reunite for a weekend outing by the Caspian Sea. The fun starts right away as they quickly catch on to the plan of lively Sepideh, who has brought along Elly, her daughter’s kindergarten teacher, in the hope of setting her up with recently divorced Ahmad. But seemingly trivial lies, which start accumulating from the moment the group arrives at the seashore, suddenly swing round and come back full force when Elly disappears in a troubling incident. The joyful atmosphere evaporates as the friends try to understand how and why she is no longer there. Panic sets in. Accusations fly and the friends become judgemental, picking over the previous day’s conversations trying to find fault in Elly’s character. The group’s opinions of Elly veer from those of the first day, until at last the truth is out.

The Time That Remains is a semi-autobiographical film, in four historic episodes, about a family – Elia Suleiman’s family – spanning from 1948, until recent times. Set almost entirely in Suleiman’s hometown of Nazareth, the film is inspired by his father’s diaries of his personal accounts, starting from when he was a resistance fighter in 1948, and by Elia’s mother’s letters to family members who were forced to leave the country. Combined with his intimate memories of them, The Time That Remains attempts to portray the daily life of those Palestinians who remained in their land and were labelled ‘Israeli-Arabs’, living as a minority in their own homeland.

A fable-like journey of an eight-year-old boy, Tahaan, and his beloved donkey, Birbal. Tahaan lives in the Kashmir valley with his grandfather, mother and older sister, who live in hope that the boy’s father, who has been missing for more than three years, will one day return home. After losing his best friend, Birbal, to a businessman as part of debt repayment, Tahaan sets off on a long quest to bring the donkey back home.

Filmed during the massive Israeli war on Lebanon in the summer of 2006, 33 Days follows the real-life stories of four people: A theatre director working with children who take shelter in a theatre after their homes are destroyed, a frontline journalist struggling to cover the war from a television station under fire, an aid worker coordinating emergency relief efforts for thousands of displaced people, and a news-desk director trying to cope not only with the war but with her new-born baby.

‘In a time when women’s rights are still a taboo in many Muslim cultures, one can only imagine how difficult it is to breach the subject of homosexuality. Homosexuality is forbidden by the Quran and condemned in Prophet Muhammed’s Hadith. As a result, Muslim homosexuals face persecution and often severe punishment under Sharia law. But most heartbreaking of all is the desperate confusion felt by those who do not wish to abandon their faith and the God they love, but cannot change who they are. A Jihad for Love gives voice to those struggling — a direct translation of the word jihad — to reconcile their homosexuality with their faith. The film follows different Muslim men and women in different countries from France to South-Africa and from Egypt to India. The fact that these people agreed to be part of it is in itself a show of tremendous bravery, evident by the many friends and acquaintances that choose not to show their faces. This is A Jihad for Love’s greatest strength: it tells the personal stories of those who normally dare not speak, which makes their plight all the more powerful.’ New Zealand Documentary Film Festival.

‘Sri Lanka’s civil conflict raged so furiously for twenty-six long years that when it was declared over, one of the main reactions was numb disbelief. Director Vimukthi Jayasundara last explored the hollow absurdities of his homeland’s war in The Forsaken Land. Four years later, the fighting has stopped but the stark symbols of war are not so easily erased. Because Jayasundara is at heart a symbolist, Between Two Worlds never sets out to explain the conflict, but it does illuminate it. Aman washes up on the shore and makes his way into a rioting city. He rescues a foreign woman, and they begin travelling out to the hills. But instead of refuge, the countryside reveals increasing menace. What begins as enigmatic soon moves to unsettling, then descends into the stark stabs of violence particular to civil war. Jayasundara is always alive to the unique nature of his setting. Shooting in widescreen compositions that show off the area’s lush green vistas to sublime effect, he conjures up images that haunt this beauty – military helicopters sweeping over the landscape, a dog feasting on a cow. Here he expands and deepens the absurdist quality he brought to The Forsaken Land. Our protagonist witnesses a van plunge madly into a lake, but when he arrives at the shore, an old man swimming there insists the incident is ancient history. “It’s possible you just saw something that happened a long time ago,” he says. Jayasundara’s Sri Lanka is a mythic place where war has collapsed the space between past and present, has militarised traditional rituals and, perhaps worst of all, has made the mute witnessing of horror an everyday act. What elevates his filmmaking from commentary to art is the sophistication of his symbolism and his fluid, graceful articulation of pain.’ Cameron Bailey, Toronto International Film Festival.

One night at a bar, an old friend tells director, Ari about a recurring nightmare in which he is chased by 26 vicious dogs. Every night, the same number of beasts. The two men conclude that there is a connection to their Israeli Army mission in the first Lebanon war of the early 80’s. Ari is surprised that he can’t remember anything about that period of his life. Intrigued by this riddle, he decides to meet and interview old friends and comrades around the world. He needs to discover the truth about that time and about himself. As Ari delves deeper and deeper into the mystery, his memory begins to creep up in surreal images.

‘Mam Baldar, the winged uncle, is a postman like no other who, for many years, has travelled among the mountainous villages of Iraqi Kurdistan recording and delivering people’s messages. One day, a partisan commander asks him to make a recording of his newborn child’s first cry. Mam sets off to find the commander’s village and, once there, is informed that all the children in the area, as well as the commander’s pregnant wife, have been evacuated to a far-off valley. Mam at once heads out for the valley.’ Umedia.

For the full program and more information on the APT6 cinema program visit: www.qag.qld.gov.au/cinematheque