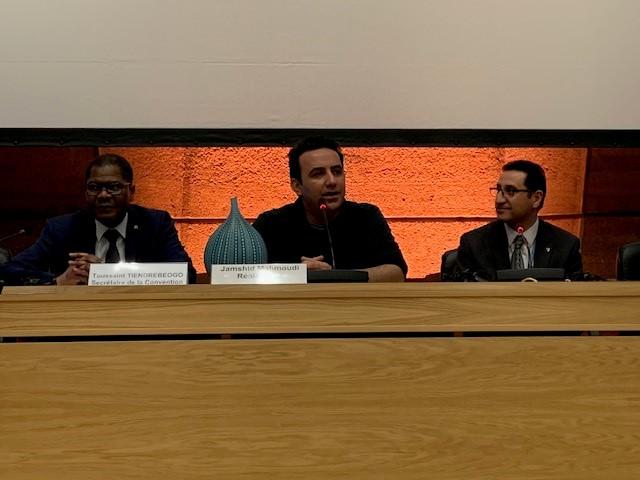 During the event Afghan/Iranian filmmaker Jamshid Mahmoudi was presented with the APSA Award, an exquisite and unique hand-made glass vessel by Brisbane artist Joanna Bone, by UNESCO’s Head, Diversity of Cultural Expressions Entity, and Secretary of UNESCO Convention for the Protection and Promotion of the Diversity of Cultural Expressions, Mr Toussaint Tiendrebeogo.

Acclaimed documentarian and author Khadija Al-Salami, member of the 2018 APSA Cultural Diversity International Jury and Yemen’s first female filmmaker, introduced the screening and hosted a post-screening discussion with Jamshid Mahmoudi and the audience.

This special screening event was presented during the 13th session of the Intergovernmental Committee that oversees the implementation of the UNESCO 2005 Convention on the Protection and Promotion of the Diversity of Cultural Expressions.

Rona, Azim’s Mother, is a deeply nuanced and heartrending depiction of the life and death issues and bureaucratic frustrations facing a family of Afghan refugees living in Iran, providing an insight into the enduring consequences for displaced populations.

The story was informed by the personal experiences of Jamshid Mahmoudi and his producer brother Navid, both born in Afghanistan, whose family sought refuge in Pakistan, and then Iran, where they live today.  The film was Afghanistan’s Official Submission for the 91st Academy Awards.

Mr Toussaint Tiendrebeogo, Head, Diversity of Cultural Expressions Entity, UNESCO, and Secretary of the UNESCO Convention for the Protection and Promotion of the Diversity of Cultural Expressions, said “UNESCO is proud of its longstanding partnership with APSA and our joint efforts to promote the diversity of cultural expressions and to support the film industry in particular, which is an important catalyst for sustainable development.  We are honoured to screen the laureate of the 2019 APSA Cultural Diversity Award, Rona, Azim’s Mother, and to welcome the Director Jamshid Mahmoudi to UNESCO on this occasion.”

Director Jamshid Mahmoudi said “Now more than ever, the medium of film is used to document the values, beliefs and culture of the human experience. This film was made to share the stories of our country and our people’s lifelong pain in exile. It was made to ensure that our experience of migration remains a part of the documented history. To receive a prize for this film makes us celebrate. But the most important thing is to have our film chosen to be screened on this special occasion, because it means we succeed in sharing our experience with the world, and for this we feel only happiness.”

Chair of the Asia Pacific Screen Awards and its Academy, Michael Hawkins said, “Film has an extraordinary power to cross cultures and boundaries, to reveal the essence of the human experience, and in doing so, provide an enduring document of cultural expression. APSA’s founding collaboration with UNESCO represents our shared common goals: to promote diversity of cultural expression and raise awareness of the value and power of culture and cultural industries at local, national and international levels.”

The Brisbane-based APSA and Paris-based UNESCO are celebrating a unique 13-year collaborative relationship and 0 this was the sixth annual screening of its kind, following similar screening events for all of the APSA-winning films in this category since 2014’s Memories on Stone.

Azim is an Afghan refugee who works at the municipality at night and lives in Tehran along with his family. Being the head of the family and the eldest brother, Azim is in charge of arranging for his brother, Faroogh, and their mother, Rona, to be smuggled into Germany. At the last moment, Azim learns of Faroogh’s decision to not bring Rona with him. In the chaos, he learns of his mother’s need for a kidney transplant. With just two months to live, Azim begins a search for a donor, but in doing so discovers that Iranians are not legally permitted to donate their organs to foreigners and that he is the only possible donor – although their doctor recommends him to not to do so. Now, he has to choose between his own life and his mother’s whom he has always claimed as the most important person in his life.

Jamshid Mahmoudi was born in 1983 in Afghanistan. He was barely one-year-old when his family sought refuge in Pakistan, and then later in lran. After graduating high school, he passed the entrance exam for Tehran’s University of Art, but preferred to work with his older brother, Navid, who is a film producer. He was an assistant director in television and theatrical features before directing his first TV film in 2008 and three more after that. In 2012, he directed his first feature, A few Cubic Meters of Love, inspired by a true story that took place in Kabul. The film was selected to represent Afghanistan in the Best Foreign Language Film category of the Academy Awards® in 2014 and it screened at over 30 international festivals and won eight awards. In 2016, he worked as the scriptwriter, the producer and editor of the feature film named Parting directed by his brother. In 2019, he completed his second film as writer and director called Rona, Azim’s Mother for which he was nominated for an APSA.

APSA Cultural Diversity Award under the patronage of UNESCO

UNESCO is the United Nations Educational, Scientific and Cultural Organization. It seeks to build peace through international cooperation in Education, the Sciences and Culture. UNESCO’s programmes contribute to the achievement of the Sustainable Development Goals defined in Agenda 2030, adopted by the UN General Assembly in 2015.