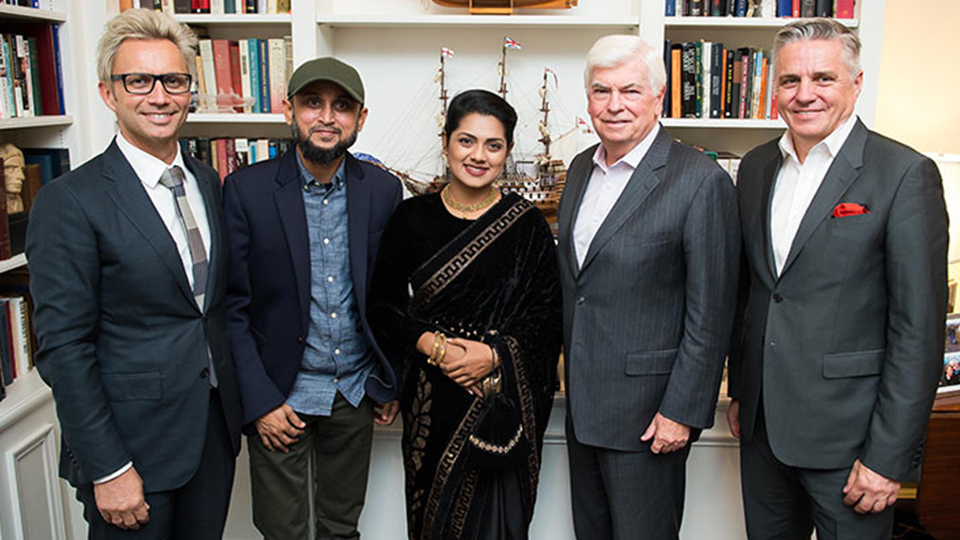 Washington D.C.: The Motion Picture Association of America and the Australian Embassy to the United States hosted a special event at the MPAA Washington Headquarters to celebrate the success of the MPA APSA Academy Film Fund. This successful and collaborative initiative, now in its 7th year, is a cornerstone of the prestigious Asia Pacific Screen Awards (APSA) celebrating cinematic excellence and promoting cultural diversity.

The MPA is a proud partner of the Asia Pacific Screen Awards, an Australian initiative that over the last ten years has built a global reputation as the region’s highest accolade in film, recognising and promoting cinematic excellence and cultural diversity of the world’s fastest growing film region: comprising 70 countries and areas, 4.5 billion people, covering one third of the earth, and responsible for half of the world’s film output.

Senator Chris Dodd, Chairman and CEO of the Motion Picture Association of America said “I had the pleasure of attending the Asia Pacific Screen Awards in Queensland, Australia, in 2011. I talked to the filmmakers in attendance and found not just a respect for the APSAs, but a deep feeling of connection, of camaraderie, and of appreciation. The APSAs truly represent film’s ability to make our world a better place which is why we are so pleased to continue working together in our film project development initiative, the MPA APSA Academy Film Fund.”

Chairman of the Asia Pacific Screen Awards and its Academy, Michael Hawkins said “APSA and the MPA are united in respecting cultural diversity and APSA values its partnership with the MPA very highly. Through their support, APSA Academy members have the opportunity to apply for 4 annual grants for the vital script development stage of their films, and to date, 24 projects have been funded, with the next 4 to be announced on November 24 during the 10th APSA Ceremony. This commitment to support the films and filmmakers of Asia Pacific in telling their stories, in celebrating their rich cultural diversity, is shared by both of our organisations, and I look forward to the continuing partnership for many years to come.”

Mostofa Sarwar Farooki was inducted into the APSA Academy in 2013 for his film Television which was nominated for APSA Best Screenplay and went on the win a the APSA Jury Grand Prize. Named as the next South-east Asian filmmaker likely to break out by The Hollywood Reporter, Farooki’s Television was selected as Closing Night of Busan International Film Festival, and picked up five further international awards from Dubai, Jogja-Indonesia, Asiatica-Roma, and Kolkata.

Speaking at the event Farooki said his MPA APSA Academy Film Fund project, NO LAND’S MAN is currently in the financing stage and is a drama which asks the question “what have we done to this world in the name of identity?”

The event culminated in a special screening of Asghar Farhadi’s MPA APSA Academy Film Fund film A Separation. Following its selection as a recipient of the MPA APSA Academy Film Fund A Separation became the first Iranian film to win the Academy Award® for Best Foreign Language Film in 2012, and the first non-English language film in five years to be nominated for the Academy Award for Best Original Screenplay. It was the first Iranian film to receive the Golden Bear for Best Film and was also awarded the Silver Bears for Best Actress and Best Actor at the 61st Berlin International Film Festival. It won the Golden Globe® for Best Foreign Language Film and the Asia Pacific Screen Award for Best Feature Film.

The 2016 MPA APSA Film Fund recipients will be announced at the tenth Asia Pacific Screen Awards ceremony in Brisbane on Thursday 24 November.

The Asia Pacific Screen Awards are the region’s highest accolade in film and will in 2016 celebrate its tenth anniversary.  The Asia Pacific Screen Awards, now with a permanent home in Brisbane; Australia’s New World City, are presented by Treasury Casino & Hotel, supported by Brisbane City Council and managed by economic development board Brisbane Marketing. APSA has the privilege of a unique collaboration with Paris-based UNESCO and FIAPF-International Federation of Film Producers Associations, and recognises and promotes cinematic excellence and cultural diversity of the world’s fastest growing film region: comprising 70 countries and areas, 4.5 billion people, and is responsible for half of the world’s film output.