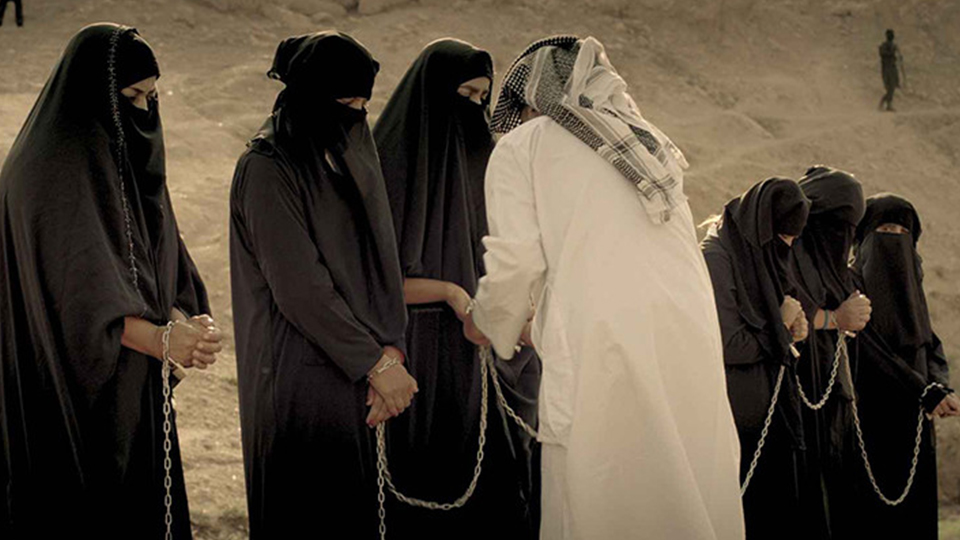 PARIS, FRANCE: APSA winning feature film THE DARK WIND (Reşeba), a compelling and contemporary tale of the realities of life and love for the Yazidi people under the shadow of ISIS, last night screened at the UNESCO Headquarters in Paris with the filmmakers in attendance.

An extremely unique event in the international film world, the screening was profoundly meaningful and timely opportunity for Iraqi Kurdish director/writer Hussein Hassan and producer/writer Mehmet Aktaş to share their work, a Mitos Film production, with an international audience working towards the same goals of peace and cultural understanding.

Hussain Hassan, who travelled from Iraqi Kurdistan to Brisbane to accept the 2016 APSA Cultural Diversity Award under the patronage of UNESCO in November, together with Aktaş presented the film at the Conference of the Parties to the 2005 Convention on the Protection and Promotion of the Diversity of Cultural Expressions.

This screening event embodies the longstanding relationship between APSA and UNESCO – the United Nations Educational, Scientific and Cultural Organisation – and their shared common goals to promote diversity of cultural expression and raise awareness of the value of culture at local, national and international levels.

This was the third annual APSA screening of its kind following the successful screening of Hany Abu-Assad’s The Idol in 2016, and in 2015, another film from producer/writer Mehmet Aktaş, Memories on Stone, directed and written by Shawkat Amin Korki, and starring Hussein Hassan in the lead role.

UNESCO is now confirmed to screen the future 2017 winner of the APSA Cultural Diversity Award under the patronage of UNESCO at the meeting of the Intergovernmental Committee for the Protection and Promotion of the Diversity of Cultural Expressions, 12-15 December, 2017, following the 2017 APSA Award Ceremony in Brisbane, Australia on 23 November.

Reşeba – The Dark Wind has a love story at its core, and is the first feature narrative dealing with the genocide against the Yazidi people living in the Kurdish Shingal region through the so-called Islamic State. The film had its World Premiere as the Opening Night of the Duhok International Film Festival, in the Kurdish region of Iraq and went on to win the APSA as well as Best Film at the Dubai International Film Festival.

UNESCO Director of the Division for Creativity, Jyoti Hosagrahar, said “UNESCO is honored to once again screen the winner of the APSA Cultural Diversity Award. The Dark Wind is such a powerful story, a cultural story, a human story. It is testimony to the capacity of film to bring communities together, and to foster understanding, respect, peace and development. The promotion of cultural and creative industries has to underpin the writers, producers, directors, and actors to make such films possible. Story telling is at the heart of how we develop as people. We are happy to screen these films to audiences in Paris; it is essential that films have global dissemination, in order that the story telling can touch everyone.”

Chairman of APSA and its Academy, Michael Hawkins said ‘Having had the honour of attending the previous APSA UNESCO screenings, I can say without hesitation that it is an incredibly powerful and unforgettable experience to see such talented filmmakers honoured in such a renowned forum. Many of these filmmakers, including Hussein Hassan, have faced incredible obstacles and challenges in making their films and come from what are currently the most troubled parts of our world. To see their stories seen and heard by a global audience, through the medium of film is a reminder of all the great that comes of the special relationship that APSA and UNESCO have forged and continue to nourish.”

In speaking about The Dark Wind, Hussein Hassan said that the film is a very special story with an important message at its heart, that ‘To make a difficult decision in hard times is not an easy act, but when the decision is right, your path will not be that difficult. A pure idea, a warm heart, as an approach to humanity.

APSA
The Asia Pacific Screen Awards, based in Brisbane, are supported by Brisbane City Council and managed by economic development board Brisbane Marketing. APSA has the privilege of a unique collaboration with Paris-based UNESCO and FIAPF-International Federation of Film Producers Associations, and recognises and promotes cinematic excellence and cultural diversity of the world’s fastest growing film region: comprising 70 countries and areas, 4.5 billion people, and is responsible for half of the world’s film output.

UNESCO
The United Nations Educational, Scientific, and Cultural Organisation works to create the conditions for dialogue among civilizations, cultures and peoples, based upon respect for commonly shared values. It is through this dialogue that the world can achieve global visions of sustainable development encompassing observance of human rights, mutual respect and the alleviation of poverty, all of which are at the heart of UNESCO’S mission and activities.

THE DARK WIND
Trailer: https://youtu.be/jMCe-m5SnJs
Shortly after the engagement of Reko and Pero, a young Yazidi couple living in the Shingal region of Iraqi Kurdistan, their village is attacked by the Islamic State of Iraq in its campaign to ‘purify’ Iraq and neighbouring countries of non-Islamic influences. Many villagers are murdered and the young women and girls sold as slaves, including beautiful Pero. Away at work, Reko evades capture but sets about to find his fiancé. What follows will tear apart their community, test their proud and ancient culture and threaten their future. Hussein Hassan’s third feature film exposes the dreadful reality of the Yazidis (an ethno-religious group practicing Yazdanism) trying to live and love under the shadow of ISIS in the face of intolerance and ignorance.

HUSSEIN HASSAN
A leading figure in Kurdish cinema, Hussein Hassan is an acclaimed director, writer and actor. His first feature film Narcissus Blossom (2006) was selected to screen at both the Toronto international Film Festival and the Berlinale where it won the Amnesty International Film Prize. In 2009 Hassan’s second feature film as writer and director, Herman, premiered at Pusan International Film Festival. Hassan also directed 29 episodes for the Kurdish TV-Drama Dilan and ten episodes of the KurdSat TV-Drama My Dream. As an actor he played the leading role in Shawkat Amin Korki’s award winning films Crossing the Dust (2006) and Memories on Stone (2014), winner of the 2014 APSA UNESCO Cultural Diversity Award under the patronage of UNESCO. Recently, he acted in Batin Ghobadi’s Mardan (2014) which premiered at the Toronto International Film Festival and was Iraq’s submission for the Oscar® for Best Foreign Language Film that year.

Materials for media including stills, press kit and clips available at
Dropbox: https://www.dropbox.com/sh/ei0wwacs0xe36iz/AAC8gTldeu3-kqAEr2bELQJGa?dl=0