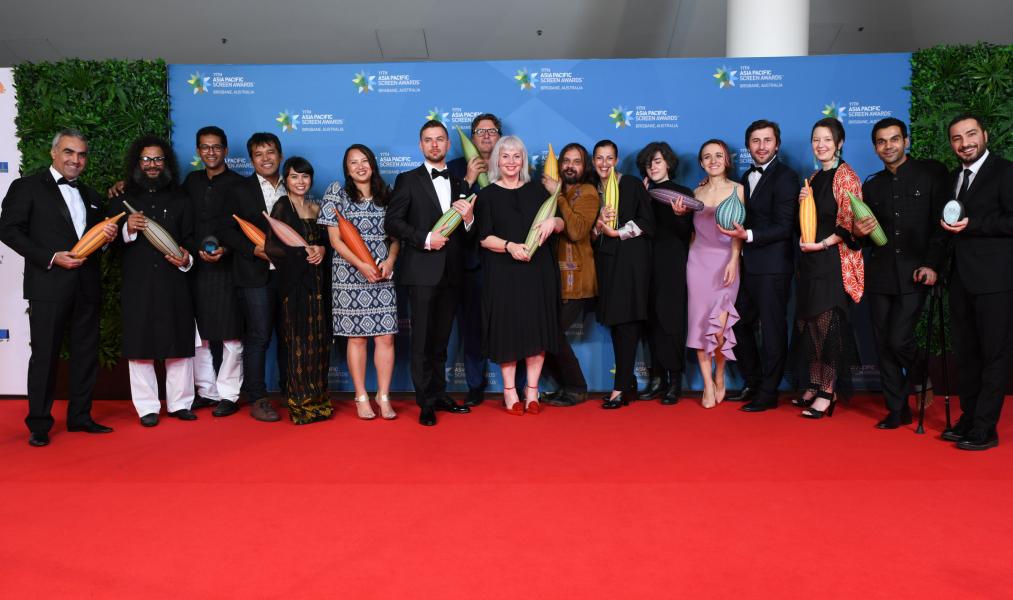 The win makes APSA history with Thornton becoming the first director to have two films win Best Feature Film following Samson and Delilah’s win in 2009. He is also the only Australian director ever to have a film win in this category.

President of the APSA International Jury, Oscar® and BAFTA®-nominated film editor Jill Bilcock ACE ASE, said Sweet Country was a milestone film about Australia’s shameful history. “It is uniquely told through Warwick Thornton’s strong cinematic style and personal knowledge of his own culture. Our jury from five countries have been transported by cinema into diverse communities and privileged to share in their personal stories, history and traditions,” she said. “I was particularly impressed by the rise of stories featuring strong women characters and also the emergence of some truly talented female directors. Overall the Asia Pacific region continues to bring us extraordinary stories and talent with a highly original slant.”

The Asia Pacific Screen Awards, the region’s highest accolade in film, honour cinematic excellence and the cultural diversity of the world’s fastest-growing film region: comprising 70 countries and areas, 4.5 billion people, and responsible for half of the world’s film output. In 2017, films from both Georgia and Russian Federation have won three APSAs each, including a Jury Grand Prize. This marks the first ever APSA win for Georgia in the 11-year history of the event. Films from Australia and India have won two APSAs each. 42 films from 25 countries and areas of the Asia Pacific region received APSA nominations in 2017, including the first nomination for a film from Bhutan.

Brisbane Lord Mayor Graham Quirk said: “Winning an Asia Pacific Screen Award is a huge achievement and, on behalf of the City of Brisbane, I’d like to congratulate the winners and thank them for sharing their extraordinary stories. I’d like to commend Best Feature Film winner the Australian-made Sweet Country and director Warwick Thornton, who took Australia’s only other win in this category in 2009 for his debut feature “Samson and Delilah. Brisbane is honoured to be part of this journey and delighted to further strengthen ties with our neighbours in the culturally rich region of the Asia Pacific.”

The Cultural Diversity Award under the patronage of UNESCO was awarded to Dede (Georgia, Croatia, Netherlands, Qatar, UK), filmed on location in the historic UNESCO World Heritage province of Svaneti and directed by Mariam Khatchvani, who accepted the award on the night. Speaking to the heart of what APSA is about, this unique award is for outstanding contribution to the promotion and preservation of cultural diversity through film. The Jury awarded a Special Mention in this category to Lady of the Lake (Loktak Lairembee, India) directed by Haobam Paban Kumar.

In honour of APSA’s founding partnership with UNESCO, it was announced at the Ceremony that Dede would screen at UNESCO’s Paris Headquarters as part of the Intergovernmental Committee meeting on the 2005 Convention on the Protection and Promotion of the Diversity of Cultural Expressions, on Tuesday, December 12, with the filmmakers invited to present the screening. This is the fourth winner in this prestigious category to have such a screening following its win.

Also from Georgia, Scary Mother (Sashishi Deda; Georgia, Estonia) was awarded both the APSA for Best Performance by an Actress for Nata Murvanidze and one of two Jury Grand Prizes presented by the International Jury, to Ana Urushadze for her direction of Scary Mother. Both Nata and Ana were at the ceremony to accept their awards.

Indian film Newton won two Asia Pacific Screen Awards, with star Rajkummar Rao in Brisbane to accept the APSA for Best Performance by an Actor, while co-writer Mayank Tewari was also at the ceremony to accept Best Screenplay awarded to the film’s writers Tewari and Amit V Masurkar. This is the second consecutive year an Indian actor has won the Best Performance by an Actor award, after 2016 winner Manoj Bajpayee for Hansal Mehta’s Aligarh, which coincident ally also starred Rajkummar Rao.

Nominated Iranian actor Navid Mohammadzadeh was awarded a Special Mention in the Best Performance by an Actor category for his performance in No Date, No Signature (Bedoune Tarikh, Bedoune Emza; Islamic Republic of Iran). Mohammadzadeh was attending the ceremony for the second time, having been nominated in this APSA category in 2014 for I’m Not Angry! (Asabani Nistam!).

The Achievement in Directing APSA has been won by Russia’s Andrey Zvyagintsev for Loveless(Nelyubov; Russian Federation, Belgium, France, Germany). Zvyagintsev’s previous film, Leviathan(Leviafan, 2014), won the APSA for Best Feature Film, while Zvyagintsev was previously awarded a High Commendation for his direction of Elena (2011).

In a further win for the Russian Federation, the winners of the APSA for Achievement in Cinematography are Pyotr Duhovskoy and Timofey Lobov for The Bottomless Bag (Meshok Bez Dna), with Lobov accepting the award on the night.

Chairman of the Asia Pacific Screen Awards and its Academy Michael Hawkins said: “I congratulate the winners in the 11th APSAs, and the two International Juries for their remarkable work in determining this year’s winners. I make particular mention of the more than a dozen returning APSA Academy members amongst the nominees and winners.”

In a rare additional statement, the Jury said: “We would like to note that two of the winning films are directed by women. We chose them because their films are excellent, but it was exciting to celebrate women’s voices and see the amazing work coming from women in this region.”

The APSA for Best Youth Feature Film went to The Seen and Unseen (Sekala Niskala; Indonesia, Netherlands, Australia, Qatar), produced by Gita Fara, Ifa Isfansyah and director/producer Kamila Andini. This is the second film Andini has directed to win an APSA, her earlier film The Mirror Never Lies (Laut Bercermin) won the APSA for Best Children’s Feature Film in 2012. The jury called The Seen and Unseen “a beautiful depiction of grief, an important subject done with elegance and lyrical use of metaphor and meditation. It is a stunning and touching film with a balletic quality. The use of magical realism was really sophisticated for a new filmmaker”. The Seen and Unseen was the recipient of an APSA Children’s Film Fund grant, a APSA Academy funding initiative for early script development.

Winner of the APSA for Best Animated Feature Film is Window Horses: The Poetic Persian Epiphany of Rosie Ming (Canada), directed and produced by Ann Marie Fleming and co-produced by Shirley Vercruysse and Michael Fukushima. The jury said: “This film is a celebration of poetry, culture and humanity all coming together. Animation was the right medium for such a subject – the best way to depict the feelings and emotions in the film. It was a representation of a woman who is living in a western society, who is from a half-Chinese, half-Persian background and the challenges she faces in reconciling her place in the world. The melding of cultures, coming together in our differences through poetry is presented as a unity for human beings, which we all need to strive for.”

Taking out the Best Documentary Feature Film category is Last Men in Aleppo (Syrian Arab Republic, Denmark, Germany), produced by Søren Steen Jespersen, Kareem Abeed, Stefan Kloos and directed by Feras Fayyad. The Jury said: “It is a very important subject, an urgent take on war. It is important to show the civilian effort in saving lives, and the resilience of people living life under siege.”

The Jury gave a Special Mention in this category to Kim Dotcom: Caught in the Web (New Zealand), produced by Alexander Behse, directed and co-produced by Annie Goldson.

The previously announced winner of the FIAPF Award, Filipino producer Bianca Balbuena, accepted her award at the APSA ceremony. The FIAPF award is determined by FIAPF-International Federation of Film Producers Associations for outstanding achievement in film in the Asia Pacific region.

The previously announced APSA Young Cinema Award for 2017 was accepted on the night by winner Ilgar Najaf for Pomegranate Orchard (Nar Baği, Azerbaijan). The Young Cinema Award presented by NETPAC (Network for the Promotion of Asian Cinema) and Griffith Film School recognises the abundant emerging talent of the Asia Pacific. Najaf’s feature Buta won the APSA for Best Children’s Feature Film in 2011.

As previously announced, the APSA 2017 International Nominations Council commends Abbas Kiarostami with a special Artistic Acknowledgement, and the APSA Academy confers a posthumous Academy membership on him. Kiarostami’s 24 Frames (Islamic Republic of Iran, France) was in Official Competition at APSA in 2017.

During the Ceremony, the Motion Picture Association (MPA) announced the four recipients of the 8th round of the MPA APSA Academy Film Fund, created to support, at script stage, new feature film projects originated by APSA Academy members and their colleagues across Asia Pacific. The fund awards four development grants of US$25,000 annually, and is wholly supported by the MPA. To date, 32 projects have now been funded, with many going into production and garnering success at film festivals around the world.

Mike Ellis, President and Managing Director Asia Pacific MPA, said, “It is always a pleasure to meet APSA Academy members who have received grants from the MPA APSA Academy Film Fund, and to hear how the funds have contributed to the project’s development process. It is doubly a pleasure to hear about a film’s completed production, and reception by audiences and critics as the film finds its way onto the festival circuit. We greatly appreciate the dedication of our Film Fund selection panel in identifying this year’s recipients from over 100 submitted projects. The MPA is committed to partnering closely with the APSAs to support filmmakers tell their unique stories, for the world will be all the richer for it. ”

APSA – Background
The Asia Pacific Screen Awards, based in Brisbane, are supported by Brisbane City Council and managed by its economic development board, Brisbane Marketing. APSA has the privilege of a unique collaboration with Paris-based UNESCO and FIAPF-International Federation of Film Producers Associations, and recognises and promotes cinematic excellence and cultural diversity of the world’s fastest-growing film region: comprising 70 countries and areas, 4.5 billion people, and responsible for half of the world’s film output.

APSA and its Academy are committed to ongoing collaborations with UNESCO, FIAPF, the European Film Academy (EFA), the Motion Picture Association (MPA), NETPAC (the Network for the Promotion of Asian Cinema), the Asia Pacific Screen Lab (APSL) and Griffith Film School.