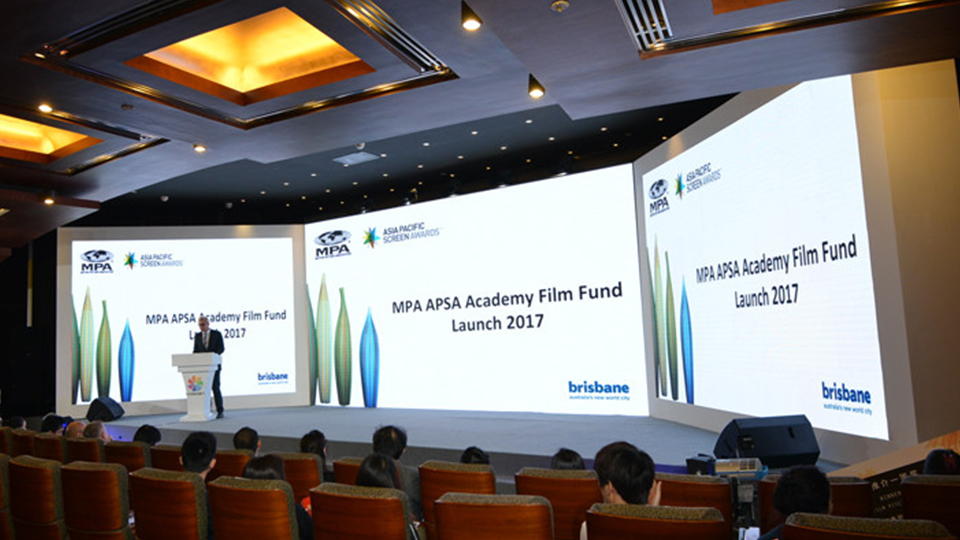 Beijing, People’s Republic of China: The Asia Pacific Screen Awards (APSA) and its Academy in partnership with the Motion Picture Association (MPA) Asia Pacific today officially opened the 8th round of the successful MPA APSA Academy Film Fund. Eight years strong in supporting the development of Asia Pacific stories, the announcement was made at the Closing Ceremony of the MPA-BFM Film Workshop at the 7th Beijing International Film Festival.

The MPA APSA Academy Film Fund was created to support, at script stage, new feature film projects originated by APSA Academy members and their colleagues across Asia Pacific. The fund awards four development grants of US$25,000 annually, and is wholly supported by the MPA.

To date, projects from no less than 19 different countries and areas of the Asia Pacific have been supported through the initiative.  The 8th round of the Fund will bring the total number of projects funded to 32. The recipients of the grants will be announced during the 11th Asia Pacific Screen Awards Ceremony on Thursday 23 November 2017 in Brisbane, Australia.

Chairman of the Asia Pacific Screen Awards, the region’s highest accolade in film, and its Academy, Michael Hawkins said “As we celebrated APSA’s 10th edition in November, the APSA Academy passed 1000 members, comprised from the exceptional filmmaking talent from this diverse region. With the support and partnership of the MPA, we now enter our 8thyear of supporting those Academy members with script development grants, to tell the stories of Asia Pacific. I know the members of the APSA Academy are very grateful, as am I, to the MPA for the opportunities that these grants provide”

Mike Ellis, President and Managing Director Asia Pacific MPA, said, ‘It is a pleasure to launch the MPA APSA Academy Film Fund for 2017 in what is now its eighth year. As the body of work produced by the fund grows in size, as does the APSA Academy, the anticipation of what new projects will be submitted is also greatly increased. The MPA is enormously proud of the Asia Pacific stories it has helped realise with this fund and is greatly looking forward to again working with APSA to provide the opportunity for another round of Asia pacific stories to be developed for the screen.’

The Asia Pacific Screen Awards, based in Brisbane supported by Brisbane City Council and managed by economic development board Brisbane Marketing. APSA has the privilege of a unique collaboration with Paris-based UNESCO and FIAPF-International Federation of Film Producers Associations, and recognises and promotes cinematic excellence and cultural diversity of the world’s fastest growing film region: comprising 70 countries and areas, 4.5 billion people, and is responsible for half of the world’s film output.

APSA and its Academy is committed to its ongoing partnerships with UNESCO, FIAPF, the European Film Academy (EFA), the Motion Picture Association (MPA), NETPAC (the Network for the Promotion of Asian Cinema), the Asia Pacific Screen Lab (APSL) and Griffith Film School.

All nominees, International Nominations Council, Nominee Selection Panels and APSA International Jury members are inducted into the APSA Academy presided over by President, Australian screen legend Jack Thompson AM PhD. The Academy boasts over 1000 of the region’s leading filmmakers and provides exclusive networking, development and funding opportunities available to Academy members through the MPA APSA Academy Film Fund, and Academy mentoring opportunities for the next generation of Asia Pacific filmmakers through the Asia Pacific Screen Lab. The APSA’s Academy partner, the European Film Academy shares the common interest of presenting pan-International Awards that promote and award excellence in cinema.

The organisations act on behalf of the members of the Motion Picture Association of America, Inc (MPAA) which include; Paramount Pictures Corporation; Sony Pictures Entertainment Inc.; Twentieth Century Fox Film Corporation; Universal City Studios LLC; Walt Disney Studios Motion Pictures; and Warner Bros. Entertainment Inc. The MPA and the MPA-I have worldwide operations which are directed from their head offices in Los Angeles and Washington, D.C. and overseen in the Asia Pacific by a team based in Singapore. For more information about the MPA and the MPA-I, please visit www.mpa-i.org.