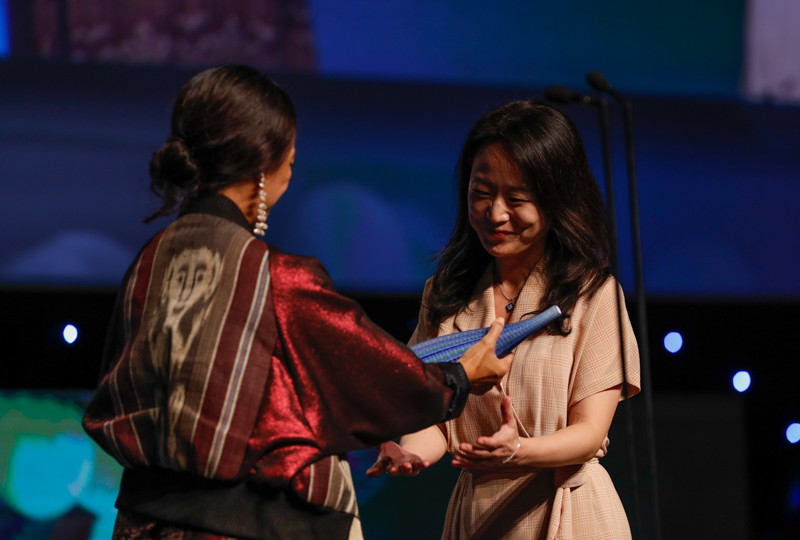 Beijing, People’s Republic of China: The Australian-based Asia Pacific Screen Awards (APSA), which honours the cinematic excellence of the culturally diverse region and the Motion Picture Association (MPA), the peak body representing some of the world’s biggest film studios, today jointly opened submissions for the tenth round of the MPA APSA Academy Film Fund.

The announcement was made from an MPA event at the Beijing International Film Festival. Both organisations acknowledged the continuing success of the fund, which is actively fulfilling its aim to increase cultural diversity on screen in the fastest growing region of film production in the world.

Committed to investing in the rich storytelling traditions of the region, spanning 70 countries and areas, the MPA APSA Academy Film Fund supports the development of, at the crucial early script stage, new feature film projects by APSA Academy members and their colleagues from across the region.

The fund awards four development grants of US$25,000 annually and is wholly supported by the MPA.

Korean auteur Lee Chang-dong, who’s critical smash-hit and fund supported film Burning opens in Australian cinemas today and on Netflix internationally on 29 April, said of the fund “MPA APSA Academy Film Fund provides great support for the screenwriters. Their support means a lot because it’s not just financial, but it shows faith in the film’s potential. They have supported and believed in me and Ms. Oh Jung-mi, and have waited for the film’s completion.’

To date, 36 projects from 20 different countries and areas of the Asia Pacific have been supported through the initiative, with recipients including both emerging talent and established auteurs. 11 feature films have been completed and debuted to international acclaim.

Fund Films in development include:

This year’s recipients, determined by the dedicated MPA APSA Academy Film Fund Jury, will be announced during the 13th Asia Pacific Screen Awards Ceremony on 21 November 2019 in Brisbane, Australia.

Chair of the Asia Pacific Screen Awards, and its Academy, Michael Hawkins said “Cinema is an art form that takes time, and ten years on we are all seeing the MPA APSA Academy Film Fund thrive, with films in all stages of development and many that have gone on to win the world’s top film prizes. I thank the MPA as our longstanding partner organisation, in supporting so many films at such a crucial stage of development.”

Mike Ellis, President and Managing Director Asia Pacific MPA, said, “It is a pleasure to launch the 10th round of the MPA APSA Academy Film Fund during the Beijing International Film Festival. The MPA is very proud of how far the Fund has come – telling diverse stories in the Asia Pacific, supporting these extremely talented filmmakers and helping to realise so many acclaimed productions for the screen. We look forward to working again with APSA to see four new projects receive support this year.”

In a further opportunity for a recipient, the MPA will hold a screening of a film from the region at the MPAA headquarters in Washington DC, USA for its constituents later in the year, the sixth such event of its kind. Previous editions of the event have included screenings of MPA APSA Academy Film Fund completed projects BURNING, A Separation, No Burqas Behind Bars and Memories on Stone.

The region’s highest accolade in film, the Asia Pacific Screen Awards, based in Brisbane, Australia, are supported by Brisbane City Council and managed by economic development board Brisbane Marketing. APSA recognises and promotes cinematic excellence and cultural diversity of the world’s fastest growing film region: comprising 70 countries and areas, 4.5 billion people, and responsible for half of the world’s film output.

All APSA nominees, International Nominations Council, Nominee Selection Panels and APSA International Jury members are inducted into the prestigious APSA Academy presided over by President, Australian screen legend Jack Thompson AM PhD. The Academy boasts over 1,200 of the region’s leading filmmakers and provides exclusive networking, development and funding opportunities available to Academy members through the MPA APSA Academy Film Fund, and Academy mentoring opportunities for the next generation of Asia Pacific filmmakers through the Asia Pacific Screen Lab.

The organizations act on behalf of the members of the Motion Picture Association of America, Inc (MPAA) which include: Walt Disney Studios Motion Pictures, Netflix Studios, LLC, Paramount Pictures Corporation, Sony Pictures Entertainment Inc., Universal City Studios LLC, and Warner Bros. Entertainment Inc. The MPA and the MPA-I have worldwide operations which are directed from their head offices in Los Angeles and Washington, D.C. and overseen in the Asia Pacific by a team based in Singapore. For more information about the MPA and the MPA-I, please visit www.mpa-i.org.